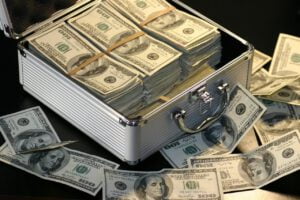 In a world that’s become more and more digital by the day, it’s never been easier to spend or save money without touching it. With tools like Zelle and digital banking features at our fingertips, is a cashless future upon us?

People Are Re-Evaluating The Way They Handle Paper Money

According to a new survey of more than 2,000 Americans by Travis Credit Union, it is – a majority of respondents (69 percent) foresee our society going completely cash-free. It might just come sooner than we ever imagined, as the COVID-19 pandemic has people across the country re-evaluating the way they approach using and handling paper money.

When asked, half of Americans said they have been using less cash than they were prior to the COVID-19 pandemic, even going so far as to avoid situations that call for it. Three out of five respondents said they don’t think they’ll return to using it regularly even when the pandemic is over. In fact, almost half (49 percent) would like to see it phased out completely. Even if it isn’t, more than half (58 percent) plan to transition to a cash-free lifestyle, most often millennials (62%) and Generation X (53%).

We could be well on our way to that cash-free future, with one out of five claiming to rarely or never carry paper money, choosing instead to use debit or credit cards when paying for goods due to convenience and hygiene. A staggering 63 percent have shopped at a cashless business and 64 percent use a payment platform such as Venmo or Zelle regularly.

Despite A Cashless Future, Businesses Should Accept Cash

But a digital financial footprint is not without its downfalls, according to respondents: a majority (70%) say they worry about potential privacy or data breaches when using a debit or credit card or interacting with a digital platform. This seems to be a common concern, especially for those who don’t use digital options – 61% say they avoid them because of privacy issues. This could explain why, despite the push for a cashless future, 77 percent believe that all businesses should be required to accept cash.

When they do carry money, they’re pocketing an average of $46.29, most often to be used for small purchases, in case of emergency, and to leave tips. Other uses include making purchases at cash-only locations and managing finances.

Those who still use cash regularly oftentimes use coins as well, which means that the national coin shortage – a result of COVID-19 – has left many in a bind. Half of those surveyed said that they have felt the ramifications of the shortage, most often when they attempt to make small purchases, make or get change, or run household errands such as going to the laundromat.

The post 58% of Americans will stop using cash after Covid-19 appeared first on ValueWalk.