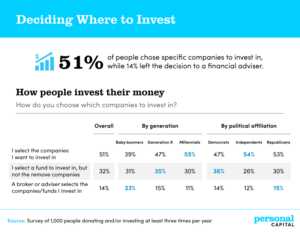 This year has brought so many social and economic issues to light in America. Whether it’s the effects of the coronavirus pandemic, Black Lives Matter, or the upcoming election, most people feel strongly about so-called “social justice”. Because of this, some people choose to donate to causes to help make a change.

But how many people are choosing this route, and what investments are they making? In a new study, registered investment adviser company Personal Capital surveyed 1,000 people who donate or invest money at least three times a year about how they decide where to put their capital. The study breaks down how many people are concerned with companies’ social stances, including Black Lives Matter and COVID-19, which generations are most influenced by these positions, and what socially responsible investing means for different political parties.

Spending Based on Social or Political Issues And Beliefs

Are people boycotting businesses because of their beliefs? According to the study, 3 in 5 people have stopped spending money at companies due to their social stances. Of the people who did this, 75% of them posted their plans on social media.

When political affiliations were compared, Republicans were eight percentage points more likely to stop spending their money due to their social stances than Democrats. Just 49% of independents agreed.

The top reasons people chose to stop patronizing these places were because they disagreed with their COVID-19 precautions (57%), their view on face masks (44%), or their opinion on the Black Lives Matter Movement (44%), and 42% cited falling on a different political spectrum as impetus.

Would people eventually support these businesses again? Approximately 69% of people said they would, but 29% said they didn’t see themselves spending money at those businesses in the future.

Overall, 69% of respondents said, since March, they started to support a new business due to their stance on important social issues. About 3 in 4 people posted on social media about their support to the companies they now patronize.

Nearly 65% of people said they decided to support a new business because of their COVID-19 precautions, more than half (55%) due to their face mask procedures, and 45% as a result of the business owner’s view of Black Lives Matter.

But some respondents revealed they started spending their money at new businesses because they are doing things to make a change. More than 1 in 3 people said they respected the business’ charitable efforts toward social issues. Nearly 30% felt it was essential to support minority-owned businesses, and slightly more than 1 in 4 people liked how a company was supporting charitable efforts toward recent health issues. Nearly 1 in 5 appreciated how specific places were supporting other local businesses.

Deciding Where to Invest

How are people deciding where to invest their money? More than half (51%) choose specific companies themselves, while 14% rely on a financial adviser.

Independents (54%) were the political affiliation who chose which companies to invest in most frequently compared to their counterparts. Democrats (36%) picked where to invest their money, but not the removal companies. The study revealed that Republicans (15%) were most likely to have a broker or adviser invest their money.

More than 1 in 4 people said they sold a company’s stock because of its behavior. Approximately 10% of baby boomers, 25% of Generation X, and 29% of millennials did just that.

More than half (52%) of people said they’d prefer to invest in a company they agree with on social issues but make less money than invest in a business they disagree with to turn more of a profit. About 60% of women and 47% of men agreed they would rather make less money on their investments knowing that the companies they choose to buy stock in align with their beliefs.

Millennials (49%) were more likely than baby boomers (44%) and Gen Xers (46%) to invest in a company they disagreed with toward the end of making more money.

Overall, 64% of respondents said they practice socially responsible investing. Politically, 71% of Democrats, 62% of Generation Z, and 65% of Republicans said they did the same. About 2 in 3 people believed the average person could make a difference by supporting businesses that promote specific social causes.

Investing can be tricky under normal circumstances, but with so much turmoil happening in America right now, these decisions can seem impossible. Whether you choose to keep social issues in mind when you are investing, it’s best to be informed of the company as best as possible before making any final decisions.

The post 3 in 5 people have stopped spending money at companies due to their social stances appeared first on ValueWalk.