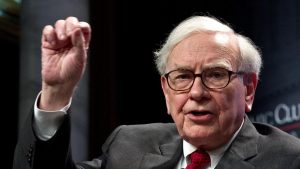 Reportedly, Warren Buffet has bought 21 million shares of Barrick Gold. A gold mining company which has maintained a strong correlation with movement in Gold.

In a statement from his previously held believes, Buffet stands for a counter-trading strategy to make money in the market. He says that the rhetoric of an economic collapse drives the masses to gold, whereas one should be deploying their assets into businesses to combat the high rates. Hence, his choice of inflationary hedges are apparently businesses, farms or real estate; specifically coco-cola, IBM etc.,

Nic Carter, the founder of Coinmetrics and Adamant Capital who shared the excerpt on Warren’s views questions the reasons which drove this investment,

In 2011, Warren Buffett said this to say about gold. Today it was revealed that he bought $560m worth of Barrick Gold, a gold miner. What changed his mind?

It is a well-known fact among Bitcoin circles, that Buffet is averse to digital currencies. He has stated various times that he has no intention of owning any them.

Now, Bitcoin is gaining immense popularity as a complementary inflationary hedge. Beginning with Paul Tudor Jone’s 1-2% allocation and most recently Microstrategy’s investment of $250 million in the digital asset are turning things in its favour.

Moreover, the correlation that Bitcoin has held with gold in recent times has been remarkable. The 90-day correlation coefficient has risen from under 0 to 0.15 units. Charles Edwards, leading crypto analyst and founder of Capriole.io tweeted,

Gold is in control of Bitcoin right now and it’s bullish.

The investment in gold mining company by Buffet indicates his bullishness in gold despite the surge to ATH at $2070 per ounce as the economic effects of the pandemic rages on. A recent pullback from the ATH has Gold prices trading around $1950, which Buffet seems to have made his entry point.

As Buffet is throwing off the towel on his aversion to gold, the question begs if he intents to add a small portion of Bitcoin to it as well? Here’s another Bitcoin enthusiast and Growth Lead at Kraken Digital Asset Exchange, Dan Held, who feels the same,

What effect do you the market will have if Warren Buffet eventually decides to invest in Bitcoin? Please share your views with us.