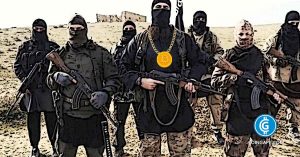 Reportedly, the U.S. Justice Department officials claim to have seized the largest amount. until now, in digital currencies.

According to the report, the dept, has seized more than 300 accounts at four cryptocurrency platforms. The accounts were used by “militant organizations based abroad, including the Islamic State group and al-Qaida.”

The details of the holdings of the cryptocurrencies have not been made public yet. The terror groups ran a series of scams and money laundering channels via telegram groups and other social media channels including Facebook. The FBI, the Justice Department, Homeland Security and many other agencies were involved in the large scale operation. The funds from the military wing of Hamas were also seized.

Michael Sherwin, the acting U.S. attorney for the District of Columbia, told the media,

“Without funding, you cannot have these operations conducted. The focus here was a very proactive effort to target these organizations in a very wide-scale manner.”

Previous confiscations of Bitcoins by the US officials dates back to 2014. Tim Draper, the billionaire investor was the first to grab the bunch in the auction by US Marshals. Jameson Lopp, Bitcoin developer tweeted,

As of today the US Marshals has missed out on nearly $2 Billion in gains by selling seized bitcoin.

According to his estimates, the Marshalls have earned a total of $151,440,000, whereas if they hodled this amount they could have earned more than $2 billion.

This time the officials could have grabbed more than just Bitcoin.

Do you think they will sell-off this batch early as well? Please share your views with us.