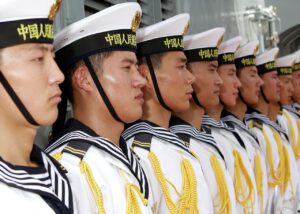 In late November 1943, as World War II raged in Europe and the Pacific, leaders of the ‘Big Three’ allied nations– the United States, United Kingdom, and Soviet Union, held a key strategy meeting in Tehran.

It’s hard to imagine anymore that the United States and Soviet Union were, at least for a time, allies. Many of us grew up in a world where the Cold War dominated, and threat of mutual nuclear annihilation was ever-present.

But it wasn’t always that way.

Relations between the Soviet Union and the West started out as fairly neutral in the 1920s. And even by the mid-1940s the two sides were allies.

The conference in Tehran (followed by another meeting in Yalta in early 1945) represented the high water mark in cooperation between the Soviet Union and the West.

But after the war, their relationship rapidly deteriorated.

By the early 1950s, the two sides were in full blown Cold War– and you could see it everywhere: the Space Race, the Arms Race, the Cuban Missile Crisis, proxy wars across Asia and Latin America, massive military buildup in Europe.

These tensions escalated very quickly… and lasted for decades– the Soviet Union and the United States were mortal enemies for nearly 50 years.

The Conflict Between The US And China

We’re seeing many of the same elements today in a new, rapidly growing conflict between the US and China.

What started off as a simple trade dispute has quickly escalated into a diplomatic crisis, and now a new Cold War.

Just over the last few weeks, both sides shut down one of the other’s consulates (the US closed China’s consulate in Houston, and China closed the US consulate in Chengdu.)

The US government has threatened to ban the popular Chinese app TikTok and to de-list Chinese companies from US stock exchanges.

Foreign reporters on both sides have had their visas revoked.

And each government accuses the other of spreading the Coronavirus around the world.

This laundry-list is practically never-ending, and doesn’t even scratch the surface of hacking and spying allegations on each side.

A Cold War Against China

The following week, the US Secretary of State effectively declared Cold War against China when he said:

[I]f we don’t act now, ultimately the CCP will erode our freedoms and subvert the rules-based order that our societies have worked so hard to build.

If we bend the knee now, our children’s children may be at the mercy of the Chinese Communist Party, whose actions are the primary challenge today in the free world.

General Secretary Xi is not destined to tyrannize inside and outside of China forever, unless we allow it. . .

Maybe it’s time for a new grouping of like-minded nations, a new alliance of democracies.

We have the tools. I know we can do it. Now we need the will.

Now, one important thing to remember is that, during the Cold War with the Soviet Union, the US was at its peak.

Today the tables are turned. China is the rising power, and the US is well past its peak.

China is one of the world’s biggest creditor nations and has a vast pool of savings. The US is the world’s single largest debtor nation, with record-high government debt, consumer debt, etc.

This year alone the US federal government will likely increase its national debt by $5 trillion. And the debt (at $26.5 trillion) is already 136% of GDP!

More importantly, as we discussed several times over the past few weeks, economic sustainability and prosperity are no longer priorities in the United States.

Governments at the local, state, and federal levels are full of Bolshevik politicians who despise successful individuals and businesses.

They are far more concerned with chasing jobs and investment out of their districts, passing retroactive tax increases, and locking down businesses from opening up (while allowing riots, rampages, and the destruction of property).

Socially, the country has completely lost its mind and is eating itself from within.

It’s hard to imagine winning a new Cold War at a time like this.

But if this conflict continues escalating, it could have dire consequences, especially for the US dollar.

Right now the dollar is the dominant reserve currency in the world.

This means, for example, that foreign governments and central banks hold their excess savings in US dollars (most frequently in the form of US government bonds).

This is why the US federal government can increase its national debt by trillions of dollars, and the Federal Reserve can print trillions more, because the rest of the world will still readily accept their currency as THE global reserve standard.

But watch what happens as this conflict with China escalates.

The US government is rapidly pushing China out of the US financial system. They may even default on the US debt that is owned by China.

Doing so will compel China to simply create its own, competing financial system.

And suddenly every country that China does business with would start using the Chinese system and increasing their holdings of Chinese renminbi.

As a result, China’s currency would essentially take global reserve ‘market share’ away from the US dollar. And even a small portion would have a huge impact.

A smaller share of global reserves would mean that the US could no longer get away with printing trillions of dollars, or piling up its endless mountain of debt.

There would be less demand from foreign governments and central banks to buy US government bonds, which would cause the dollar to lose a LOT of value. That means serious inflation.

Conflict with China is by far one of the single biggest threats to the dollar. So it’s worth paying attention to, because, as the last Cold War proved, it can escalate rapidly and persist for decades.

On another note… We think gold could DOUBLE and silver could increase by up to 5 TIMES in the next few years.

The post This Is One Of The Single Biggest Threats To The Dollar Today appeared first on ValueWalk.