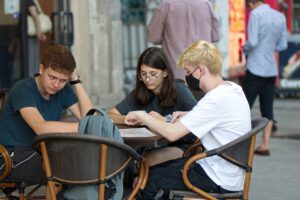 Yesterday afternoon, the Senate adjourned for August recess –  with no new relief bill passed, and no additional support provided for American businesses, workers, and families struggling to make ends meet as COVID-19 continues to suppress the nation’s economy. Two weeks after the CARES Act’s enhanced $600 unemployment benefit ran out, Congress has still failed to come to an agreement on further assistance. And now senators are on their way out of Washington, leaving the more than 40 million Americans newly jobless since the start of the crisis high and dry – with even more trouble on the horizon.

What Senate Lawmakers Are Leaving Behind Before The August Recess

Here’s some of the mess senate lawmakers are leaving behind as they depart for a month-long August recess:

The Rich Take Stock of Rebounds…

… but the S&P 500 Index’s rise is doing little for struggling American families trying to stay afloat with little congressional support.

The recession is over for the rich, but the working class is far from recovered. “U.S. stocks are hovering near a record high, a stunning comeback since March that underscores the new phase the economy has entered: The wealthy have mostly recovered. The bottom half remain far from it.” [Washington Post, 8/13/20]

Kodak Insider Makes Well-Timed Stock Gift of $116 Million to Religious Charity He Started. “Eastman Kodak Co. ’s wild stock-market ride produced what might be the biggest contribution on record to a religious nonprofit, the product of a well-timed gift by Kodak board member George Karfunkel… Mr. Karfunkel is listed in those filings as its president.” [Wall Street Journal, 8/11/20]

The COVID-19 recession is basically over for the rich and Wall Street, but not for the working class. “President Trump has focused on the ‘tremendous’ rebound on Wall Street. ‘We’re in the middle of a pandemic and yet we’re going to be hitting records,’ he told Fox Business on Thursday. ‘The corner bars, the family restaurants, the hair salons, and other small businesses across the U.S. that are teetering or closing for good aren’t listed on the stock market.’” [The Week, 8/14/20]

… as senators and congresspeople pack their bags for August recess.

How small businesses got screwed. “The story of American business in the pandemic is a tale of two markets: tech firms and online retailers as winners awash in capital alongside collapsing brick-and-mortar and mom-and-pop shops.” [AXIOS, 8/14/20]

Trump’s proposed $300 federal unemployment boost could leave out up to 1.5 million low-wage workers from receiving jobless benefits. “It mandates that people must earn at least $100 in state benefits, a threshold experts say could leave out many part-time and gig workers from getting federal aid. ‘The people I’m most worried are those who are doing their best to try and get back to work,’ said unemployment expert Michele Evermore. One economist estimated it could leave out up to 1.5 million workers.” [Business Insider, 8/13/20]

More than 1 in 3 Black women are on the front lines of the pandemic, but they aren’t even close to equal pay. “When looking at the workers who are essential in today’s coronavirus crisis, more than 1 in 3 Black women are in front line jobs, according to the National Women’s Law Center, including roles as personal care aides, nursing assistants, cashiers and retail salespeople. But, despite Black women playing a crucial role in today’s pandemic, they are still disproportionately underpaid for their work, making it even harder for them to build a roadway to economic prosperity.” [CNBC, 8/13/20]

Georgia is Getting Schooled…

… as Governor Brian Kemp’s poor handling of the pandemic in the Peach State — exasperated by the hurried & unorganized re-opening of schools — acts as microcosm for what’s to come if the government doesn’t establish a robust national testing strategy.

Georgia High School With Viral Hallway Photo Reopens Again After 35 Students, Teachers Catch COVID. “The Georgia high school was shut down Monday and Tuesday to be cleaned and disinfected and initially planned to reopen Wednesday, but the closure was extended until the rest of the week. As of Wednesday, the school has reported at least 35 confirmed cases among the student population of 2,000, according to the Paulding County School District.” [Newsweek, 8/13/20]

… what if we told you these headlines weren’t from March, but were as painfully recent as this week?

Testing mess leaves Texas in the dark as cases spike. “The number of people getting tests has plummeted in the last two weeks, which could understate how widespread the virus really is as schools reopen and hospitalizations and deaths remain near record highs.” [Politico, 8/13/20]

Health providers’ scramble for staff and supplies reveals sharp disparities. “Doctors, nurses and caregivers at smaller and poorer hospitals and medical facilities across the country are still struggling to obtain the protective gear, personnel and resources they need to fight the coronavirus despite President Donald Trump’s repeated assertions that the problems are solved.” [Politico, 8/14/20]

We’re doing a lot less coronavirus testing. “The U.S. is cutting back on coronavirus testing. Nationally, the number of tests performed each day is about 17% lower than it was at the end of July, and testing is also declining in hard-hit states. Why it matters: This big reduction in testing has helped clear away delays that undermined the response to the pandemic. But doing fewer tests can also undermine the response to the pandemic.” [AXIOS, 8/13/20]

Florida Governor Warns of More Nursing Home Deaths to Come. “’Over the next couple weeks, I’m concerned of seeing kind of a tail where we start to see some of these long-term-care deaths,’ DeSantis said Thursday from Tallahassee.” [Bloomberg, 8/13/20]

Trump adds coronavirus adviser who echoes his unscientific claims. “Dr. Scott Atlas, a fellow at Stanford University’s Hoover Institution who frequently appears on Fox News and has advised Republicans in the past. And crucially, unlike the government’s medical experts who have advised Trump until now, has adopted a public stance on the virus much closer to Trump’s — including decrying the idea that schools cannot reopen this fall as ‘hysteria’ and pushing for the resumption of college sports.” [CNN, 8/12/20]

The post Senate Fails To Clean Up Mess Before August Recess appeared first on ValueWalk.