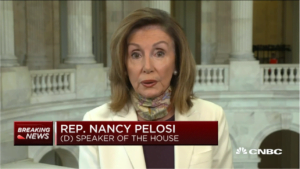 CNBC excerpts: Representative Nancy Pelosi speaks with CNBC’s “Squawk on the Street” today on working with GOP to help the disenfranchised

‘Perhaps You Mistook Them For Somebody Who Gives A Damn’: Pelosi On Working With GOP To Help The Disenfranchised

Pelosi: Trump Could Extend Moratorium On Evictions With An Executive Order

Pelosi On Governance And Helping The Disenfranchised

Jim Cramer: Can we give a huge chunk of money to the people who are disenfranchised? To minorities who want so badly to stay in business and can’t? And to people who are trying to go to college or have student loans who are minorities, who are the most affected because they had the least chance in our country? That’s got to be something both sides can agree to.

Nancy Pelosi: Perhaps you mistook them for somebody who gives a damn for what you just described.

Around 70,000 people have died while Mr. McConnell pressed the pause button. Will we find a solution? We will. Will we have an agreement? We will. But it’s hard to share – to go across the table with somebody that wants to give a tax break for somebody to have a business lunch and refuses to give more money for children who are food insecure in our country, to giving more food stamps. That’s kind of a definition of who we are.

Pelosi On Going Back To School

We all want our children to go to school. Our children want to go and be with each other. Teachers want to teach. Parents need to work and also want their children to learn. Parents earning, children learning. But we can’t do it at the risk of our children and our teachers and those who work in schools, in addition to teachers. It has to relate to the rate of infection ina community. And there are formulas for that.

Pelosi On The Cost Of Schools Reopening

What’s interesting about this negotiation, though, is where we are on the money for schools is to say if they’re actual, if they’re virtual or if they’re hybrid, it doesn’t cost that much difference in money. It just doesn’t. So, it’s not – when the president says most of the money we send there only goes to schools that open up, it ignores the fact that there are differences in terms of the rate of infection in communities. Again, this is based on science, not based on whatever it is that the president bases his decisions on.

Economists tell us, spend the money, invest the money for those who need it the most because they will spend it. It will be a stimulus or at least a stabilization of – and that’s a good thing. Consumer confidence is a good thing for the economy.

Pelosi On Helping Disenfranchised And The Hospitality Industry

What we’re trying to do to help hotels, which are big employers, restaurants, which are big employers, and the rest, is to lower the threshold for how someone can qualify for a second loan. Republicans have it at 50%. Nydia velazquez, our chairman, is urging a 30% threshold, 30% of revenues – of losses from the previous year. It was based on the previous quarter, the similar quarter of the former year. Now we’re talking about the whole year, and 30% rather than 50%, which would make, I’m told by the hospitality industry, a big difference for them.

The post ‘Perhaps You Mistook Them For Somebody Who Gives A Damn’: Pelosi On Working With GOP To Help The Disenfranchised appeared first on ValueWalk.