In mid-July, the Trump administration instructed hospitals to change the way they reported data on their coronavirus patients, promising the new approach would provide better, more up-to-the-minute information about the virus’s toll and allow resources and supplies to be quickly dispatched across the country.

Instead, the move has created widespread confusion, leaving some states in the dark about their hospitals’ remaining bed and intensive care capacity and, at least temporarily, removing this information from public view. As a result, it has been unclear how many people are in hospitals being treated for COVID-19 at a time when the number of infected patients nationally has been soaring.

Hospitalizations for COVID-19 have been seen as a key metric of both the coronavirus’s toll and the health care system’s ability to deal with it.

Since early in the pandemic, hospitals had been reporting data on COVID-19 patients to the U.S. Centers for Disease Control and Prevention through its National Healthcare Safety Network, which traditionally tracks hospital-acquired infections.

In a memo dated July 10, the U.S. Department of Health and Human Services told hospitals to abruptly change course — to stop reporting their data to the CDC and instead to submit it to HHS through a new portal run by a company called TeleTracking. The change took effect within days. Vice President Mike Pence said the administration would continue releasing the data publicly, as the CDC had done.

Almost immediately, the CDC pulled its historical data offline, only to repost it under pressure a couple days later. Meanwhile the website for the administration’s new portal promised to update numbers on a daily basis, but, as of Friday morning, the site hadn’t been updated since July 23. (HHS is posting some data daily on a different federal website but not representative estimates for each state.)

“The most pernicious portion of it is that at the state level and at the regional level we lost our situational awareness,” said Dave Dillon, spokesman for the Missouri Hospital Association. “At the end of this, we may have a fantastic data product out of HHS. I will not beat them up for trying to do something positive about the data, but the rollout of this has been absolutely a catastrophe.”

The Missouri Hospital Association had taken the daily data submitted by its hospitals to the CDC and created a state dashboard. The transition knocked that offline. The dashboard came back online this week, but Dillon said in a follow-up email, “the data is only as good as our ability to know that everyone is reporting the same data, in the correct way, for tracking and comparison purposes at the state level.”

Other states, including Idaho and South Carolina, also experienced temporary information blackouts. And The COVID Tracking Project, which has been following the pandemic’s toll across the country based on state data, noted issues with its figures. “These problems mean that our hospitalization data — a crucial metric of the COVID-19 pandemic — is, for now, unreliable, and likely an undercount. We do not think that either the state-level hospitalization data or the new federal data is reliable in isolation,” according to a blog post Tuesday on the group’s website.

“Massachusetts hospitals are continuing to navigate the dramatic increase of daily data requirements,” the Massachusetts Health and Hospital Association said in a newsletter on Monday. “MHA and other state health officials continue to raise concerns about the administrative burden and questionable usefulness of some of the data.”

“Hospitals across the country were given little time to adjust to the unnecessary and seismic changes put forth by the U.S. Department of Health and Human Services, which fundamentally shift both the volume of data and the platforms through which data is submitted,” the association’s CEO, Steve Walsh, said in the newsletter.

A number of state websites also noted problems with hospital data. For days, the Texas Department of State Health Services included a note on its dashboard that it was “reporting incomplete hospitalization numbers … due to a transition in reporting to comply with new federal requirements.” That came just as the state was experiencing a peak in COVID-19 hospitalizations.

A spokesperson for HHS acknowledged some bumps in the transition but said in an email: “We are pleased with the progress we have made during this transition and the actionable data it is providing. We have had some states and hospital associations report difficulty with the new collection system. When HHS identifies errors in the data submissions, we work directly with the state or hospital association to quickly resolve them.

“Our objective with this new approach is to collaborate with the states and the healthcare system. The goal of full transparency is to acknowledge when we find discrepancies in the data and correct them.”

Last week, HHS noted, 93% of its prioritized list of hospitals, excluding psychiatric, rehabilitation and religious nonmedical facilities, reported data at least once during the week. (The guidance to hospitals asks them to report every day.)

Asked about the lack of timely data on its public website, HHS said it will update the site to “make it clear that the estimates are only updated weekly.” HHS is now posting a date file each day on healthdata.gov with aggregate information on hospitalizations by state.

But unlike the prior releases from CDC, which provided estimates on hospital capacity based on the responses, this file only gives totals for the hospitals that reported data. It’s unclear which hospitals did not report, how large they are, or whether the reported data is representative.

It’s also unclear if it’s accurate. New York state, for instance, reported that fewer than 600 people were currently hospitalized with COVID-19, as of Friday. Federal data released the same day pegged the number of suspected and confirmed COVID-19 hospitalizations at around 1,800.

Louisiana says more than 1,500 people are currently hospitalized with COVID-19. The federal data puts the figure at fewer than 700.

Nationally, The COVID Tracking Project reports that more than 56,000 people were hospitalized around the country with the virus, as of Thursday.

Hospitalizations in the U.S. for COVID-19 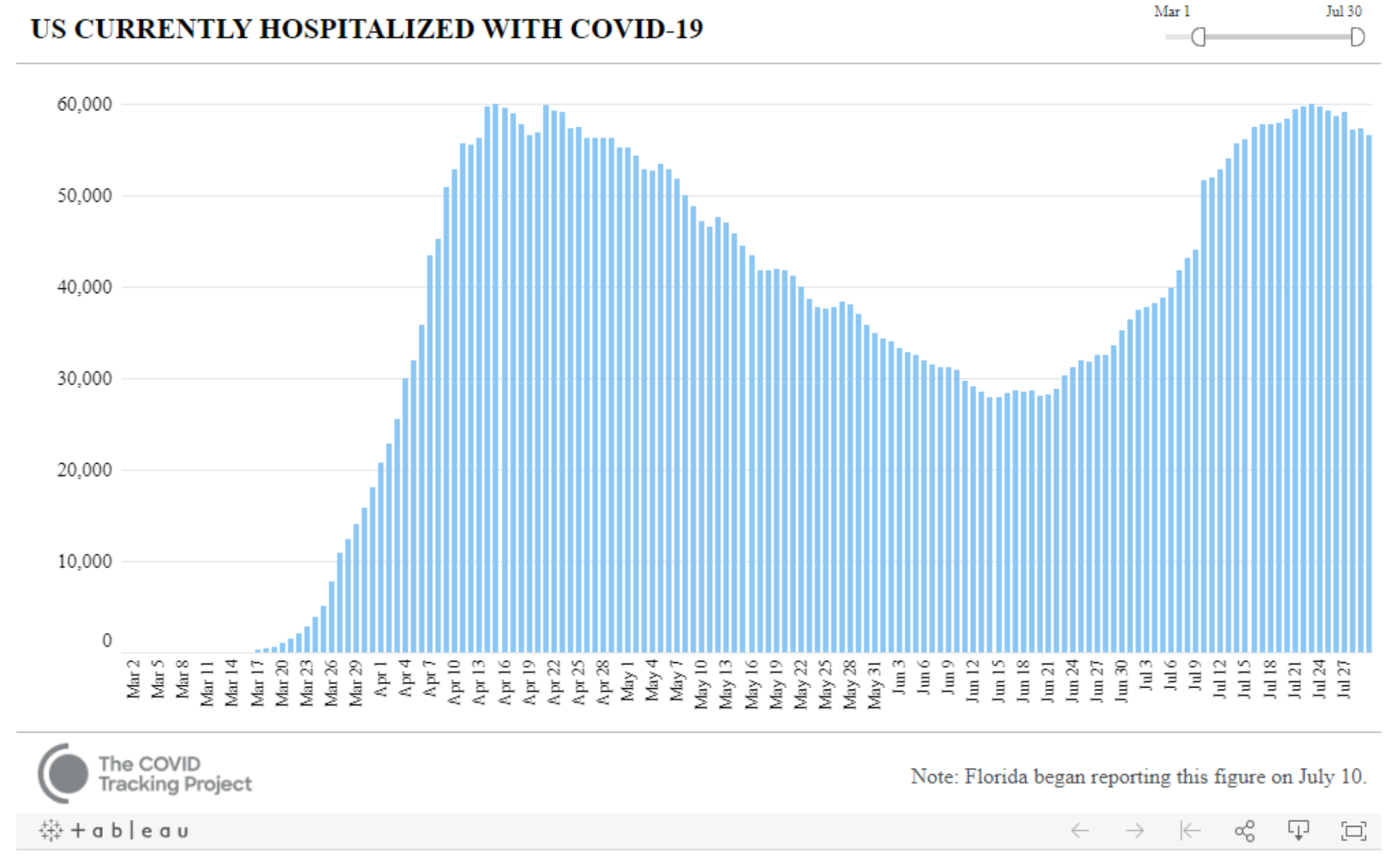 The data released by HHS on Friday puts the figure at more than 70,000.

NPR reported this week that it had found irregularities in the process used by the Trump administration to award the contract to manage the hospital data. Among other things, HHS directly contacted TeleTracking about the contract and the agency used a process that is more often used for innovative scientific research, NPR reported.

An HHS spokesperson told NPR that the contract process it used is a “common mechanism … for areas of research interest,” and said that the system used by the CDC was “fraught with challenges.”

Ryan Panchadsaram, co-founder of the tracking website CovidExitStrategy.org, has been critical of the problems created by the hospital data changeover.

“Without real-time accurate monitoring, you can’t make quick and fast and accurate decisions in a crisis,” he said in an interview. “This is just so important. This indicator that’s gone shows how the health system in a state is doing.”

Dillon of the Missouri Hospital Association said the administration could have handled this differently. For big technology projects, he noted, there is often a well-publicized transition with information sessions, an educational program and, perhaps, running the old system and the new one in parallel.

This “was extremely abrupt,” he said. “That is not akin to anything you would expect from HHS about how you would implement a program.”

Help us report on coronavirus. Are you a public health worker, medical provider, elected official, patient or other COVID-19 expert? Help make sure our journalism is responsible and focused on the right issues.

If you develop emergency warning signs for COVID-19, such as difficulty breathing or bluish lips, get medical attention immediately. The CDC has more information on what to do if you are sick.