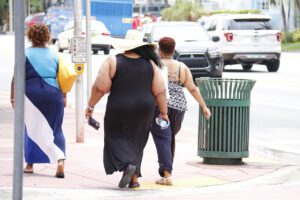 WASHINGTON, D.C. (AUGUST 5, 2020) –  Canadian doctors are being told by their medical association that being obese isn’t necessarily unhealthy, and that they should not even discuss a person’s weight – much less recommend eating less – without permission, because it “casts blame and shame upon people living with obesity.”

This although obesity is a major controllable factor in causing deaths from the pandemic, one in four Canadians are obese, the rate of people living with obesity has tripled over the past three decades in Canada, overweight accounts for over 10% of all Canadian health expenditures, and it reduces Canada’s GDP by almost 4%.

Interestingly, HBO comedian Bill Maher recently advocated just the opposite, and his approach seems to make more sense, says public interest law professor John Banzhaf, who has been called the lawyer “Who’s Leading the Battle Against Big Fat” as well as
“The Man Big Tobacco and Now Fast Food Love to Hate,” and who has studied and written extensively on how to reduce obesity, as well as smoking, which he slashed.

New guidelines just published by the Canadian Medical Association seem to put more emphasis of patients’ feelings than about their mortality and morbidity, says Banzhaf, since they specifically admonished weight-related stigma against obese patients, and argue that culture wrongly casts “blame and shame upon persons living with obesity.”  The guidelines blame “assumptions about personal responsibility and lack of willpower.”

But notes Banzhaf, who has helped pressure millions to quit smoking by banning smoking in public places and thereby stigmatizing smoking, many smokers quit not because of counseling by doctors or public health messages, but rather because they could no longer stand being treated as “social pariahs,”  a term they frequently used.

Using Fat Shaming As A Tactic To Attack Obesity

Comedian Bill Maher has just suggested on his HBO program that we should at least consider using fat shaming as a tactic to attack America’s second most serious and expensive public health problem (after smoking), despite objections from many liberals (whom he called “the NRA of mayonnaise”) and from the so-called fat acceptance movement.

Maher ridiculed that movement which excoriates anyone who criticizes a person for being fat – accusing such critics of suffering from fat-phobia and sizeism –  and drawing an analogy to criticizing someone who is drunk; saying sarcastically “How dare you drink-shame me – being blotto is beautiful.”

Quoting a New York Times report that “poor diet is the leading cause of mortality in the United States,” he argued that “fat shaming needs to make a comeback,” and that “shaming is the first step towards reform,” noting that it worked for smoking, littering, and to some extent for racism.

But shaming smokers – making them feel, in their own words, like “social pariahs” – was tremendously effective in helping smokers do what most already wanted to do, says Banzhaf, who played a major role in slashing smoking in the U.S., thereby saving millions of lives and hundreds of billions of taxpayer dollars in medical care costs.

While there may be little comparable data proving that similarly shaming people who are obese helps them to lose weight, if it worked to help people with a hard core addiction to a deadly and highly addictive drug like nicotine, it might likewise help people who absentmindedly pile more food onto their plates than they really need or is healthful for them, suggests Banzhaf, whose legal action forced broadcasters to make hundreds of millions of dollars worth of TV and radio broadcast time available free for antismoking messages.

The initial antismoking messages, which largely stressed the health dangers of smoking, were of only limited effectiveness, he says. But when the messages switched to deliberately shaming smokers – such as an anti-ad showing Brooke Shields joking that putting cigarettes in her ears made her look sexy and sophisticated – the messages proved to be far more effective, especially among young smokers, notes Banzhaf.  Moreover, every no smoking sign in a public place was a not-too-subtle remainder that – rather than making people sexy, social, and sophisticated – smoking actually made them so stinky and smelly that other people shun them.

A recent study concludes that the “total cost of chronic diseases due to obesity and overweight was $1.72 trillion – equivalent to 9.3 percent of the U.S. gross domestic product (GDP),” although the CDC’s estimate is lower.  And a large part of those huge costs are borne by taxpayers in the form of higher taxes to pay for obesity-caused – and therefore totally unnecessary – medical care expenses under Medicare, Medicaid, and other governmental programs, as well as in bloated health insurance premiums.

So anything which might help slash the prevalence and huge unnecessary costs of obesity – which, unlike with smoking, are continuing to rise n both the U.S. and Canada – and thereby reduce deaths and medical care costs related not only to heart attacks and strokes, but also to COVID-19, might well be worth trying, and certainly should not be deliberately discouraged, argues Banzhaf.

At a time when some companies are actually refusing to hire people who are obese and/or charging them far more for their health insurance, shaming the great majority who can control their weight by eating more healthful foods, reducing portion size, and getting a bit more exercise seems far less extreme, especially if it provides a much needed additional incentive for fat people to do what most already want to do – stop being obese.