by Ava Kofman and Hannah Fresques

Record numbers of Americans are receiving unemployment insurance during the pandemic. That’s because of the enormous scale of jobs lost — but also because Congress greatly expanded the number of workers eligible for benefits. For the first time, thanks to the Pandemic Unemployment Assistance program, part-timers, independent contractors and gig workers qualify for unemployment payments. Black workers are overrepresented in these nontraditional positions, which in the past has contributed to making them less likely to receive unemployment payments than other groups.

Yet despite the expansion of eligibility, a smaller percentage of unemployed Black workers are receiving unemployment benefits than white workers during the pandemic, according to national survey data from NORC at the University of Chicago: 13% of jobless Black workers received such payments between April and June, compared with 22% for Hispanic workers and 24% for white workers.

During the Pandemic, White Unemployed Workers Have Been More Likely to Receive Unemployment Benefits

According to an analysis of national survey data, Black unemployed workers were about half as likely to receive such benefits.

Source: Nyanya Browne and William Spriggs, Howard University, analysis of COVID Impact Survey, conducted by NORC at the University of Chicago for the Data Foundation, April 20 to June 8, 2020.

“In every recession, we see these same disparities,” said William Spriggs, a Howard University economist who analyzed the data. After the 2008 financial crisis, for example, 23.8% of jobless Black workers received unemployment vs. 33.2% for white workers, according to a 2012 study of national claims data by the Urban Institute.

Some of the continuing disparity is explained by geography, according to Michele Evermore, a senior policy analyst with the National Employment Law Project. Many states have made it more difficult to access benefits in recent years. In the 1950s, an average of 50% of jobless people were able to regularly access benefits; by the end of 2019, that average had fallen to 28% of workers. The states that have made the deepest cuts to their unemployment programs are mostly in the South and have a higher share of Black residents. In states such as Florida and North Carolina, fewer than 12% of jobless individuals received benefits last year.

Many States Have Severely Limited Who Is Eligible for Benefits …

In the South, and other states shaded lightly below, it’s much harder for people to receive unemployment benefits. For example, 10% of jobless residents in North Carolina got benefits in 2018, compared with 50% in New Jersey. 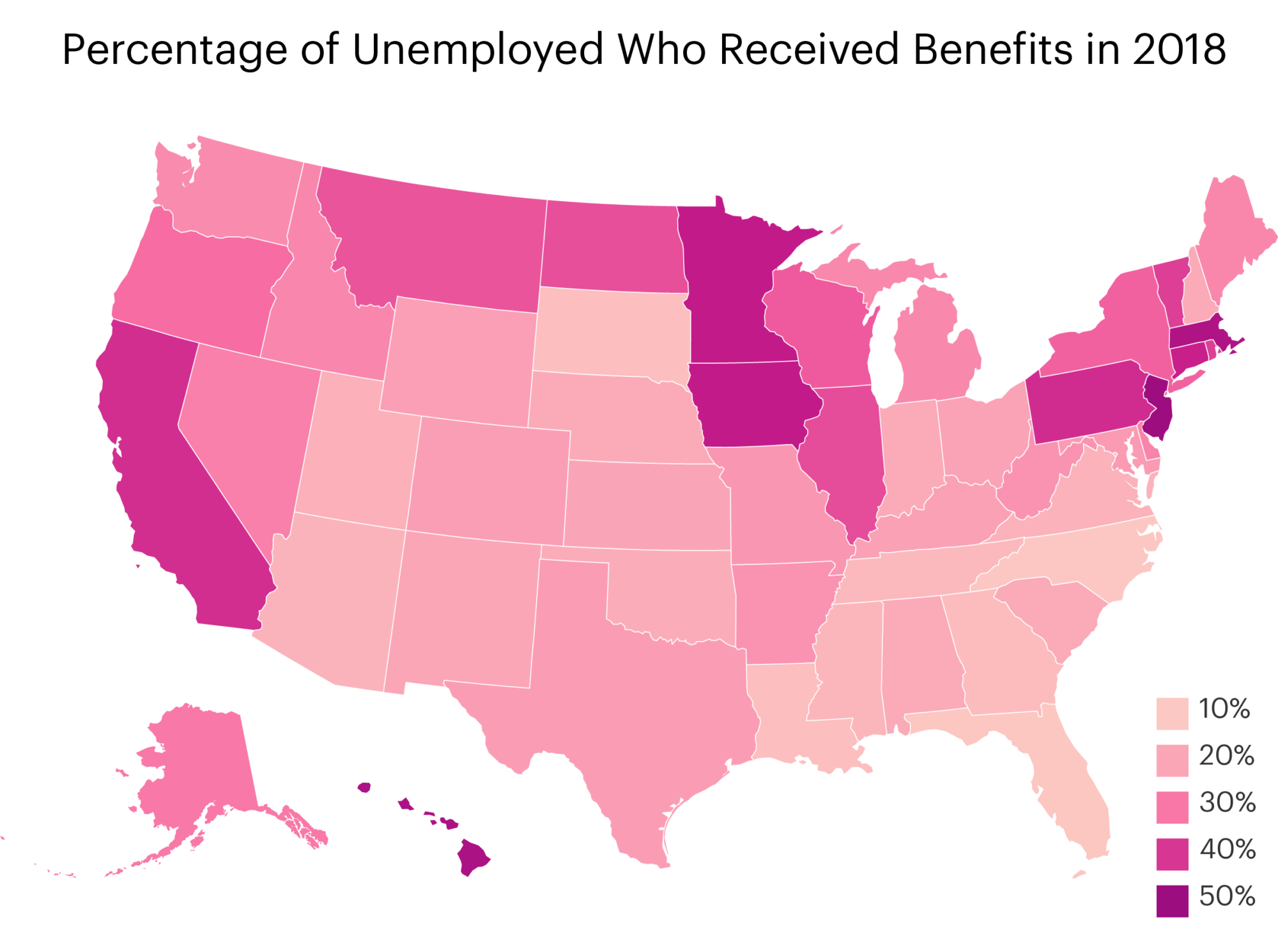 … And Benefits for Those Who Receive Them Are Less Generous

Among those who received unemployment benefits in 2018, the program replaced 36% of lost wages in Louisiana, compared with 53% in Iowa. 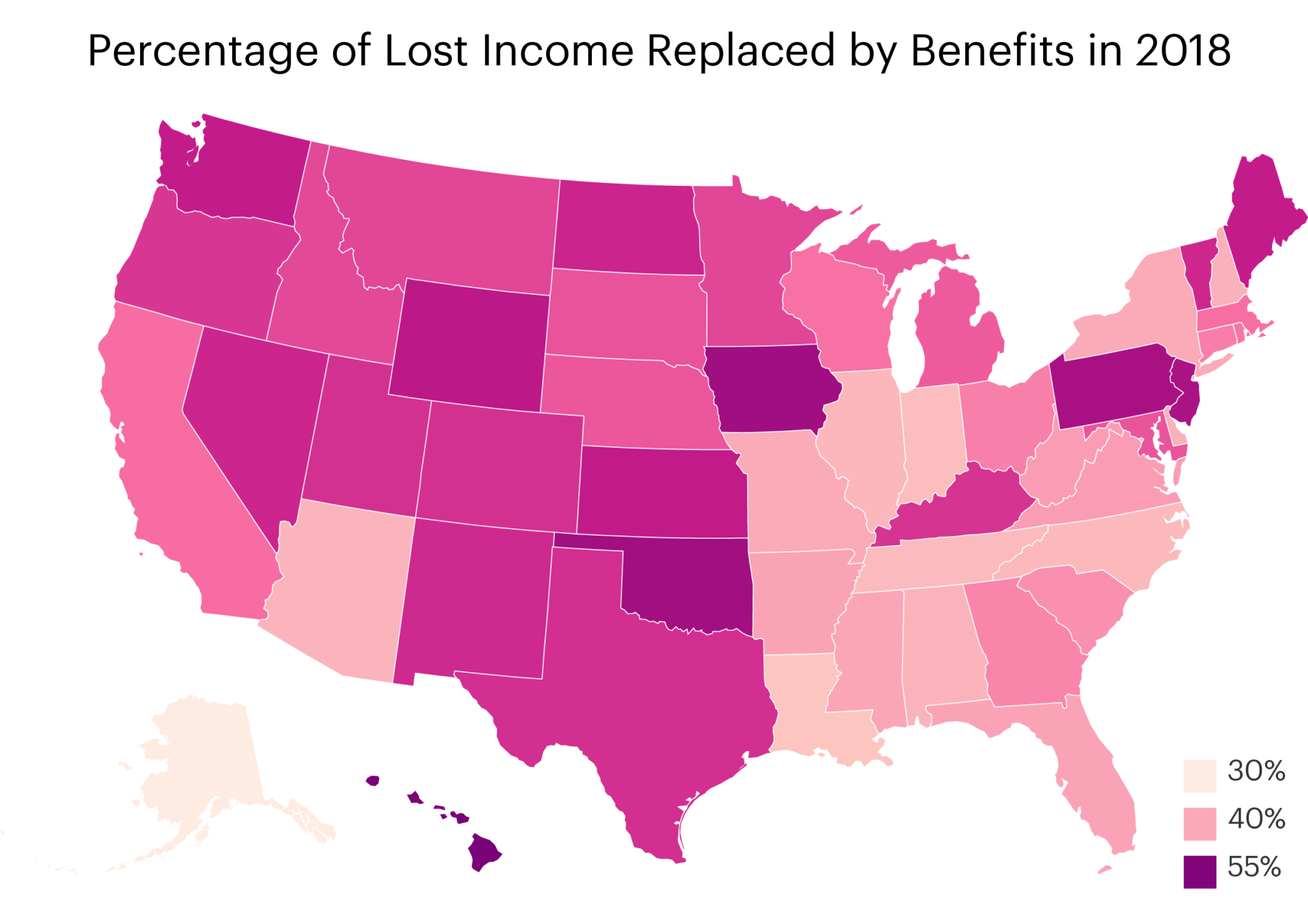 As a result, the weaker benefits in those states disproportionately affect Black unemployed workers. 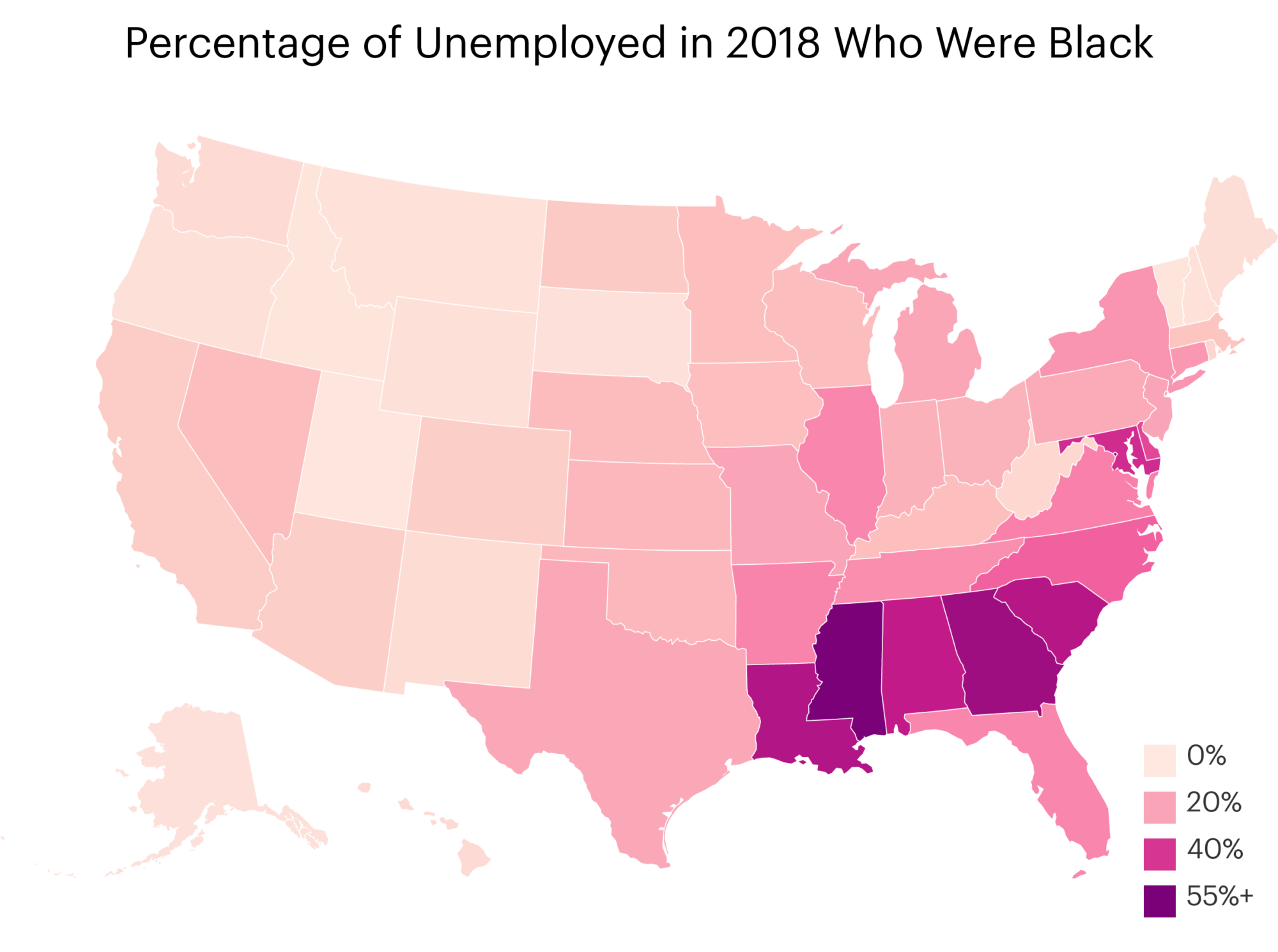 These low rates perpetuate themselves. People in states with restrictive benefits are often deterred from applying for them, research shows, because they perceive themselves to be ineligible, whether or not they actually are. Moreover, workers who have been historically excluded — because they are temporary employees or work on call — may not know the new pandemic assistance program exists and, therefore, may not have bothered to apply for benefits at all. Black workers have been applying for benefits during the pandemic at a lower rate than white workers, according to the NORC survey.

The inequity in unemployment benefits is all the more damaging because Black workers have been more likely to be unemployed in both the current downturn and in past recessions. Even when the economy is healthy, Black unemployment is dramatically higher — often double — that of white workers. The gap cannot be explained by gender, age or education level. (Were it not for the fact that Black workers are overrepresented in transit and service industry jobs currently deemed “essential,” the rate of Black unemployment today would be even worse.)

Black households have long suffered from lower wages, lower incomes and fewer assets to fall back on than white households. “Because Black households have one-tenth of the wealth of white households, it’s that much more important that unemployment insurance kicks in to reduce the different experiences across these racial groups,” said Damon Jones, an economist who teaches at the University of Chicago. “If you start out with less wealth and you have less access to unemployment insurance, you’re doubling down on this negative impact.”

That scenario appears to be playing out today. A Pew study in April found 48% of Black Americans were having trouble paying bills, compared with 44% for Hispanics and 26% for whites.

Even when Black workers do obtain benefits, they often receive smaller payments than white workers, since the benefits are determined by salary and Black workers earn less at every education level. “If your historical earnings reflect labor market discrimination, you’re going to get hit with lower benefits,” said Jared Bernstein, a fellow at the Center on Budget and Policy Priorities. “The underlying formulas of the system reflect this historical discrimination.”

Black workers are also more likely to exhaust the standard 26 weeks of benefits than white counterparts because they tend to stay unemployed longer than their white peers. Job discrimination in the labor market and fewer workplace protections mean that Black workers are typically the first to lose their jobs and the last to get them back.

If the longstanding gulf suggests a two-tiered unemployment system, that’s by design. “You wonder why this system is so messy and complicated,” Jones said. “And then you look back in the history and you see that the origins of some of these barriers were driven by racism and xenophobia.”

The Social Security Act established unemployment insurance, in 1935, as a joint federal-state system. It had a narrow definition of who deserved benefits: full-time breadwinners who had been momentarily laid off but would return to work as soon as business picked up. This definition deliberately excluded agricultural and domestic workers, jobs held predominantly by Black Americans, from its purview.

Historians have debated the extent to which these exclusions stemmed from racial animus. But whatever the motivations, the original definitions had a disparate impact: 65% of Black workers fell outside the reach of the new program, and in agrarian parts of South, that number went up to 80%, according to Larry DeWitt, a former historian for the Social Security Administration.

It’s been decades since employers began abandoning traditional work practices, in which full-time staffers put in 40-hour weeks, in favor of part-time arrangements and independent contractors. One study from the National Bureau of Economic Research found “all the net employment growth in the United States from 2010 to 2015” took place through what it called “precarious” arrangements: temporary help agency work, on-call work, contract work and independent contracting. Such arrangements account for 40% of all jobs, according to estimates in a 2015 GAO report, and are expected to increase as the economy emerges from the pandemic.

Despite the pandemic assistance program passed by Congress in March, the outdated vision of employment in most state unemployment systems continues to put Black, Hispanic and female workers at a disadvantage. These workers not only disproportionately hold on-call, temp or contingent positions. They also get shut out of the system because they are more likely than white men to work sporadically or leave work for child care — scenarios that render them ineligible for benefits.

Meanwhile, the pandemic program that expands unemployment eligibility is temporary; it expires on Dec. 31. So far, the various rounds of negotiations on extending congressional funding for unemployment have not focused on continuing the expanded eligibility. Economists like Evermore have called for legislation that would permanently include contingent workers — and increase the amount and duration of benefits. The continuing inequities, she said, make the nation’s unemployment system “far less effective at countering recessions than it could be.”