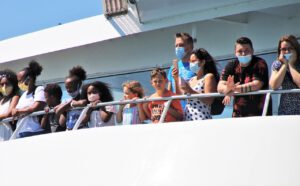 Bill Gates is speaking out against tech companies, saying they “deserve rude, unfair, tough questions.” He made the remark in an interview with the Armchair Expert podcast. He also talked about Steve Jobs, fame, his foundation’s work on COVID-19 vaccines and more.

Bill Gates told Dax Shepard that because the founders of tech companies are so successful, they “deserve rude, unfair, tough questions.” He said Amazon and founder Jeff Bezos “have done a phenomenal job, but that type of grilling comes with the super successful territory.”

He was referring to the Congressional hearings in July, during which lawmakers criticized them for their business practices in connection with an antitrust probe. He also said that the U.S. government isn’t “crushing COVID” and that if Bezos handled it, he would “knock this thing out in three weeks.

Bill Gates called Steve Jobs, the co-founder of Apple, one of the biggest tech companies in the world, “a genius.” He said what Jobs did at Apple over 10 years was “truly phenomenal” and that the company’s success wouldn’t have happened without him. He added that he was “jealous” of Jobs’ ability to motivate people, referring to Jobs as a “wizard” and himself as a “minor wizard.”

Shepard said Jobs and Gates invented the tech icon genre of fame. In response, the Microsoft co-founder described his fame as “certainly crazy, particularly because I was kind of nerdy and not very sociable.”

Beyond tech companies, Bill Gates also talked about how he continues to learn things at his age. He said he’s “embarrassed” that he isn’t fluent in any languages other than English. He also said that when he is learning something new, it takes him some time to adapt to the new information. Because of that, he feels like a fraud because new things can be so confusing.

However, he also said confusion is a good thing. He still sees himself as a student, and he believes that many people leave that mindset as they become adults. Gates believes most adults decide something isn’t for them as soon as they realize that something is confusing for them.

He also talked about Brad Pitt and the film Spy Game, which he has seen 12 times and called “such a clever movie.” He talked about Michael Jordan and the recent series that focused on Jordan called Last Dance. Shepard asked him whether someone can achieve what Jordan, Jobs or Gates did and still be “a sweetheart.”

Gates said “maybe not” and that he wasn’t a sweetheart when he ran Microsoft. He said people who push themselves hard and are hard on themselves tend to do the same thing to other people.

In another interview with The Economist last week, Gates also said many people will probably die from the coronavirus despite never having been infected with it. He believes millions of people will die due to the virus and its indirect impacts.

Gates explained that COVID-19 has put an immense strain on the world’s healthcare systems, preventing many people from getting healthcare for illnesses and conditions other than the coronavirus. He expects undeveloped countries that are fighting HIV and malaria to be hit the hardest by the indirect effects of COVID-19.

He again criticized the U.S. response to the pandemic and praised China’s response. Gates said the biggest mistake made by the U.S. was that it didn’t start responding early enough. He feels that China responded well enough even though it was rather passive in the beginning.

The full interview with The Economist can be viewed here: