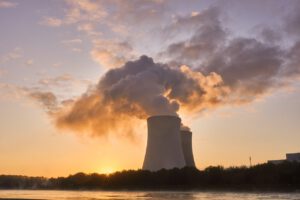 Bill Gates founded a nuclear energy venture, which is preparing to build small reactors capable of storing electricity generated by wind, solar or other green energy sources. The billionaire philanthropist has written and spoken a lot about climate change recently, saying it could one day claim more lives than the COVID-19 pandemic.

Reuters reports that Bill Gates founded his nuclear energy firm called TerraPower LLC 14 years ago. The company plans to build small nuclear power stations that will store sustainable energy to supplement grids that are increasingly supplied by power sources that are intermittent, like window solar power.

The plan is part of the Microsoft co-founder’s effort to push back against climate change. It’s designed to help utilities reduce their greenhouse gas emissions without making electric grids less reliable.

TerraPower will be partnering with GE Hitachi Nuclear Energy on the project. Together, the two will be commercializing stations called Natrium within the next 10 years in the U.S. The project hasn’t been reported before.

TerraPower President and CEO Chris Levesque told Reuters that they are looking for more funding from the U.S. Energy Department and private partners. He also said PacifiCorp, which is owned by Warren Buffett’s Berkshire Hathaway, supports the project. Duke Energy and Energy Northwest also support it.

If the plan is successful, they will build nuclear power plants in both the U.S. and abroad. Levesque they could see “hundreds of these reactors around the world, solving multiple different energy needs” by 2050.

Each one of the 345-megawatt nuclear plants will come with a price tag of approximately $1 billion. Liquid sodium will be used to cool the plants.

Nuclear power is a major source of electricity that’s almost without emissions. However, many U.S. plants have been shuttered due to high costs and competition from other sustainable sources like wind and solar. Those who oppose advanced nuclear argue that smaller nuclear is even pricier than conventional nuclear.

However, Reuters said the new nuclear energy plants from Bill Gates’ firm will complement renewable power because they will store that energy in tanks of molten salt on days when the grid has plenty of supply. That nuclear power could then be used at other times when window or solar energy are low because of weather conditions.

Thermal solar plants have used molten salt to store energy in the past, but some of the projects have been hampered by leaks. Levesque said their Natrium design will keep temperatures more consistent than they are in a solar plant. That should lead to less wear and tear on the facility.

Gates, who serves as chairman of TerraPower’s board, issued a statement saying that the innovation of their Natrium design was “extremely difficult,” but their team has “the expertise, commercial experience, and the resources necessary” to build reactors that are viable.