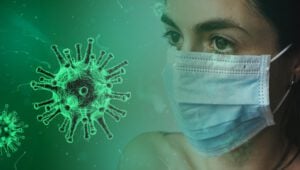 Bill Gates has been talking a lot about the coronavirus, vaccines and the U.S. response to COVID-19, but now he’s talking about climate change. In a post on his blog, Gates talked about why climate change could end up being worse than COVID-19.

Gates said that COVID-19 has caused “a tragic number of deaths, making people afraid to leave home, and leading to economic hardship not seen in many generations.” He then argued that “in just a few decades,” the same can be said about climate change.

“As awful as this pandemic is, climate change could be worse,” Bill gates wrote.

He added that it’s difficult to think about issues like climate change right now because it’s human nature to worry only about immediate needs during a major disaster like COVID-19. However, he said that “dramatically higher temperatures” will still be a major problem even though right now they “seem far off in the future.”

Bill Gates believes the only way to avoid the worst-case scenario in climate change is to speed up efforts to fight it now. While the world battles the coronavirus and starts to recover from it, he said efforts should also be made to “avoid a climate disaster by building and deploying innovations that will let us eliminate our greenhouse gas emissions.”

Greenhouse gases on the decline

Bill Gates argues that this year’s decline is unimportant for the fight against climate change because it’s only a one-time decrease. In order to really make a difference in climate change, he said an 8% reduction would be needed every year, but he said that isn’t possible.

“Consider what it’s taking to achieve this 8% reduction,” he wrote. “More than 600,000 people have died, and tens of millions are out of work. This April, car traffic was half of what it was in April 2019. For months, air traffic virtually came to a halt.”

He added that the remarkable thing this year isn’t how much emissions will decline due to the pandemic but how little. Further, he said the decline was being achieved at “the greatest possible cost.”

Economists feel a reasonable cost to avert greenhouse gas emissions is $100 per ton. That means using technology that costs $1 million but allows the world to avert the release of 10,000 tons per gas. However, data from the Rhodium Group indicates that in the U.S. and the European Union, the cost to avert greenhouse gas emissions has amounted to between $3,200 and $5,400 per ton.

Bill Gates on why climate change is worse than COVID-19

To explain why climate change is worse than the coronavirus, Bill Gates advised readers to look at the damage caused by COVID-19 and “spread the pain out over a much longer period.” He argues that the death and “economic misery” caused by the pandemic are on par with what we will see on a regular basis if carbon emissions are not eliminated.

On the other hand, if emissions fall, he said the death rate falls to 10 per 100,000 people. To put this into perspective, he said that by 2060, climate change could be just as deadly as the coronavirus, and by 2100, it could be five times as deadly.

Bill Gates also said that in the next decade or two, the economic damage caused by climate change will probably be as bad as having a COVID-10 pandemic every 10 years. By the end of the century, he said the economic cost will be far worse if emissions are not brought down.

The post Bill Gates: climate change will be worse than COVID-19 appeared first on ValueWalk.