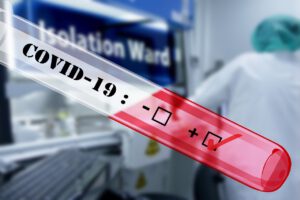 Billionaire philanthropist Bill Gates continues to talk about the coronavirus testing problems in the U.S. He told CNN’s Fareed Zakaria GPS over the weekend that it’s “mind-blowing” that the U.S. hasn’t been able to build its ability to provide fast responses to coronavirus tests.

Bill Gates put some of the blame for the coronavirus testing problems on the laboratories that process the tests. He said commercial labs shouldn’t be paid for tests if they don’t deliver the results of those tests within three days, adding that “no other country has this testing insanity.”

The Microsoft co-founder also said he has been talking to the federal government. He recommends that the Centers for Disease Control and Prevention set up a public website to prioritize who is able to be tested and how fast they can get tested and receive results.

Quest and LabCorp are two of the biggest commercial labs in the U.S. According to CNBC, they said previously that they were overwhelmed by the COVID-19 tests, which has caused them to fall behind in delivering the results.

Gates said in July that the delay makes the majority of COVID-19 tests a “complete waste” because it takes too long to get results to people so they can self-isolate when they find out they have the virus. If people who have the coronavirus don’t isolate themselves quickly enough when they have it, they will continue to spread it around.

“You’re paying billions of dollars in this very inequitable way to get the most worthless test results of any country in the world,” he told CNN. “A variety of early missteps by the U.S. and then the political atmosphere meant that we didn’t get our testing going.”

He added that people pay just as much for late results as for timely results while “very wealthy people have access to these quick-turnaround tests.”

Vaccine to be ready by next year

Gates also said again that he expects the U.S. to be mostly through the pandemic by the end of next year as a vaccine and effective treatments become available. He also said the pandemic will be over “for the rich world” by late next year.

However, he expects the developing world to continue fighting it beyond that time. He told Wired that “the world at large” should be through the pandemic by the end of 2022.

Gates expects the vaccine to be ready by the end of this year or early next year. He said last week that he has funded the vaccine candidates that are in development by AstraZeneca, Novavax, and Johnson & Johnson.

The Bill and Melinda Gates Foundation has pledged to put over $350 million toward research into COVID-19. A lot of that funding has gone toward research and manufacturing capacity for a vaccine when it becomes available.