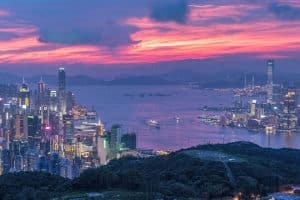 The Maintenance of the National Security Law was on June 30, 2020, swiftly passed during the meeting of the 13th NPC Standing Committee effectively “gaging” Hong Kongers. The law comprise three ordinances that make up the city-state’s penal law.

Specifically, the Society’s Ordinance covers elements relating to national security. It prevents the formation of triads and the creation of criminal societies.

Subversion of the Chinese authority, secession talks, terrorism—like damaging public transport system, and collusion with external forces, are all criminalized and attracts a maximum sentence of life in prison.

Expectedly, the law was rejected by the city’s residents as the U.S. will likely impose sanctions on Chinese firms (including banks) or leaders suppressing Hong Kong’s drive to democracy through the Hong Kong Autonomy Act.

This act prevents the region’s banks from accessing the fluid USD system.

It is this ban that threatens to shake the crypto markets. In the coming days, experts worry the crypto settlement options will be negatively impacted.

The Hong Kong Autonomy Act was in response to the Chinese government passing the National Security Law. The U.S. Government, through the re-activated act, will bar U.S. companies or its subsidiaries in Hong Kong from accessing the USD-denominated financial system.

This drastically, reduces their transaction capabilities (the U.S. government determines the amount of money sent), spelling doom to thousands if not millions of clients depending on Hong Kong-based businesses.

Crypto Companies And Brokers At Risk

Subsequently, there is a risk that banks operating in Hong Kong might be cut off from the U.S. financial system.

If this stays as it is, it is likely that crypto companies in Hong Kong and Macao, entities that are largely dependent on the U.S. financial system, will bear the brunt. Crypto trading bans are in force in mainland China.

Therefore, the majority of businesses including cryptocurrency exchanges domiciled in Hong Kong will likely suffer since transactions between clients and firms are settled in USD.