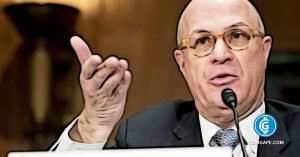 China is well ahead in the development of the CBDC, while other countries are catching up, the United States is still the nascent stages of developing the digital dollar. However, the former Chairman of the CTFC recently urged the government to probe the matter.

“Future-Proof The Dollar For A Digital Tomorrow”

Cryptocurrencies are mostly decentralized and have lesser centralized structures in place compared to fiat. The governments and central banks of certain countries seem to like the idea of cryptocurrencies, however not the decentralized part. Hence, Central Bank Digital Currencies [CBDC] became the talk of the town. While China has taken the lead on this one, other countries like Japan and South Korea are trying to keep up. However, a few other countries don’t seem to have a keen interest in rolling out their own CBDC.

While the main topic at discussion was, “US-China: Winning the Economic Competition” Giancarlo suggested that the rollout of the digital dollar could elevate the economy of the country. He believes that the global competitiveness of the US economy could be strengthened by upgrading the national currency, the US Dollar [USD]. Giancarlo pointed out that this was the one of the most important factors. Highlighting the drawback of the current system he added,

“… nothing reveals the limits of our existing financial system more clearly than the tens of millions of Americans having to wait a month or more to receive COVID relief payments by paper check.”

Furthermore, he elaborated on the working of CBDCs using cryptography and the distributed ledger technology that would reduce the time consumed in transferring or receiving money. While urging the government to commence working on the digital dollar, Giancarlo suggested that the government shouldn’t take the dollar’s predominant global status for granted. He said,

“We must future proof the dollar for a digital tomorrow.”

On one hand, the US is still in its nascent stages of developing the digital dollar. China, on the other hand, has already begun testing the digital yuan publicly.