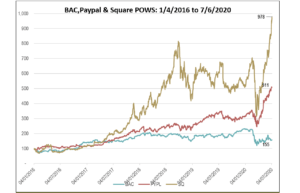 Charlie Munger is famous for stressing the role of moats in successful investing.  He argues that only strong moats allow a business to earn returns in excess of the cost of capital for substantial periods of time.  The big problem is maintaining a moat.  Potential competitors, eyeing those excess returns, will want to enter.  What is worse, they will target those aspects of an incumbent’s business that are the most profitable and offer the best opportunities for growth.  Technology serves to exacerbate the difficulty of maintaining a moat.  It often allows an entrant to use software and electronic communication to reduce the cost of grabbing an incumbent’s most profitable busines.

Tesla’s Dominance Of The EV Market

For example, Tesla took advantage of the fact that electric cars are simpler to build and require less service to revamp the manner in which cars are built, serviced, and sold.  As I have stated numerous times in my Valuewalk columns, with the emergence of Tesla the brand names of auto incumbent manufacturers switched from being a plus to, in many cases, a minus as the incumbents failed to produce attractive, desirable electric cars in any volume leaving the field to Tesla.  (See: The Auto Industry and Tesla: A Retrospective)

The Performance Of Bank Of America, Paypal And Square

But the story is not limited to automobiles.  Another example I turn to here is electronic financial transactions.  One would think that with their infrastructure and history major banks would have had a large moat around these transactions.  That has not proved to be the case.  It turns out that with respect to the stock market’s perception, in the past few years investors have come to believe that banks may be having a “Tesla” moment with respect to processing electronic transactions.  To dig deeper into the story, consider the performance of three competitors: Bank of America (BAC), Paypal and Square.

Bank of America is well known.  One of the oldest, largest, and most successful banks in the country, it became a financial conglomerate with the acquisitions of Countrywide and, more importantly, Merrill Lynch.  The company’s largest investor is Berkshire Hathaway, of which Mr. Munger is Vice-chairman, which owns more than 10% of the stock.

Originally, functioning primarily as a company that cleared transactions for eBay, Paypal was spun off from eBay 2015 and has since grown into a broad-based provider of electronic payments and funds transfers.  Square was founded in 2009 by Jack Dorsey and Jim McKelvey and launched its first app and service in 2010.  Square provides, together with its subsidiaries, payment, and point-of-sale solutions in the United States and internationally. The company’s commerce ecosystem includes point-of-sale software and hardware that offers sellers payment and point-of-sale solutions. 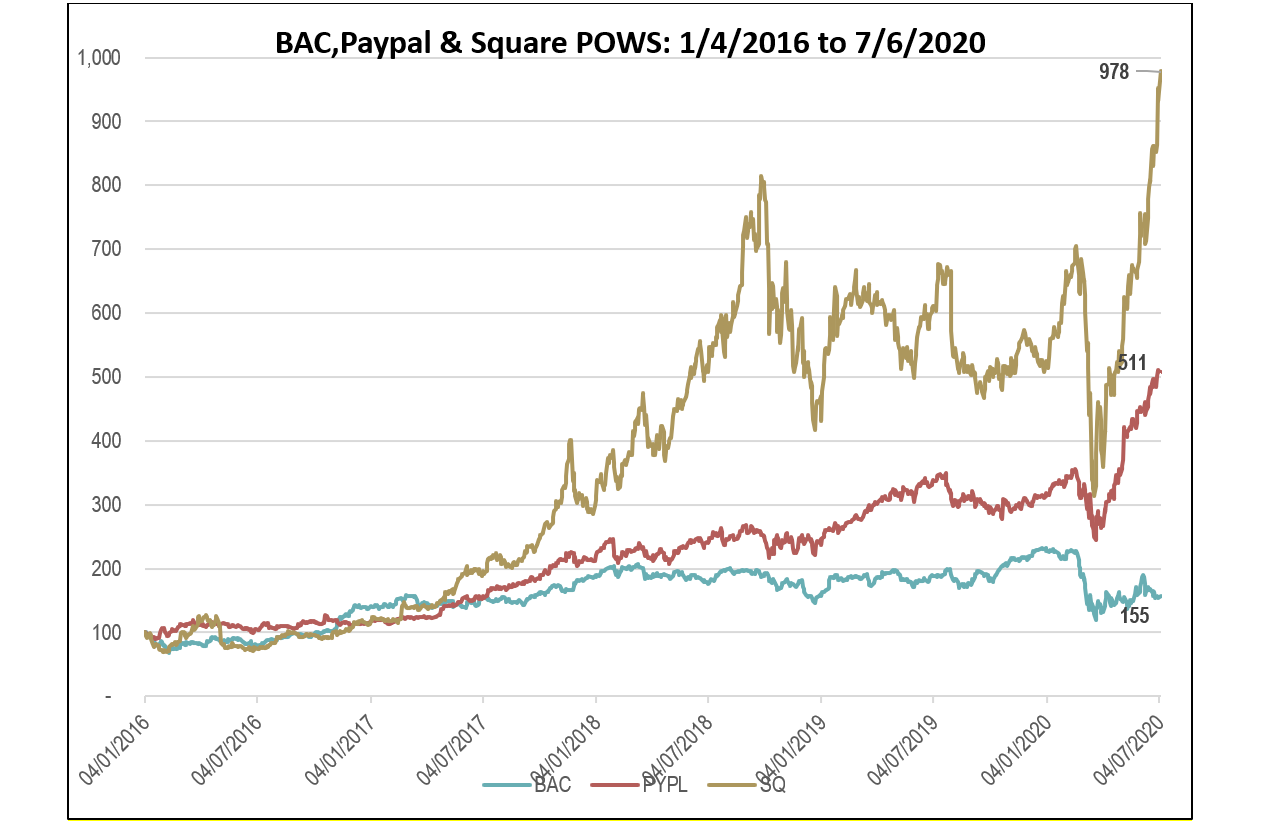 The Path Of Wealth

To provide perspective on how the market has valued the three companies over time, Exhibit 1 plots the path of wealth (POW) for an investment of $100 in each of the companies on

$155, whereas the $100 invested in Paypal and Square had rocketed to $511 and $978, respectively.  The market was apparently concluding that Paypal and Square could successfully overcome historical moats built by BAC.

Perhaps even more stunning than the exhibit is a comparison of market capitalizations.  As of the market close on July 17, 2020, the market capitalizations of BAC, Paypal and Square were $201 billion, $204 billion, and $53 billion, respectively.  Paypal was worth more than BAC, even though its earnings of $1.88 billion on a trailing twelve months (TTM) basis were less than 10% of BAC’s earnings of $18.9 billion.  The reason for this surprising result is that PayPal’s P/E (TTM) multiple is 115 compared to BAC’s multiple of 11.  Square has relatively miniscule earnings of $0.31 billion, but trades at a multiple of over 182, so that its market cap is more than 25% of BAC’s.

The combination of the high market capitalizations and the immense multiples are evidence that the stock market is predicting that Paypal and Square will both grow rapidly and skim off the most profitable parts of the financial transaction business.  Although BAC has a remarkable brand name and history, its moat appears to be drying up.  Given the relative pricing of the three companies, the market has concluded that due to their technical prowess the companies that are now building sizeable moats are Paypal and Square.  In contrast, the market is saying that BAC is stuck in an old model brick and mortar banking business with narrow margins.

But all of this does not mean that Paypal and Square are the better investments than BAC.  In fact, at Cornell Capital Group we think the reverse is true.  It is hard to see an investor making reasonable returns buying Paypal or Square at the nosebleed prices and huge multiples at which they trade.  In comparison, at a multiple well less than the market average, BAC has a lot of upside potential if it can compete aggressively.  But that is the big if.  BAC must leverage its brand name and keep pace with technology.  If that happens, the multiples of the three companies are likely to converge making BAC investors very happy and Paypal and Square investors, not so much.