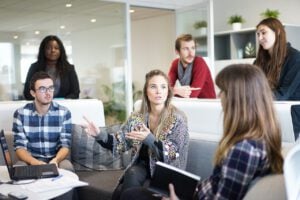 Gaslighting is an emotional manipulation tactic that is used by people in the workplace, in personal relationships, and more. It’s normally perpetrated by someone in a place of power, but it can really be used by anyone with a personal agenda and a desire to tear others down in order to fulfill that agenda.

If you feel like you’ve been a victim of gaslighting in the workplace, we’ve put together this short guide to help you navigate the issue and help get it resolved. It’s never easy to confront a gaslighter, especially in a fragile environment like your workplace, but it’s wrong for someone to manipulate others for a personal agenda.

Follow this guide to learn how to better handle gaslighting at work.

Before we cover how to handle gaslighting, we’ll need to define it and provide some examples of what it looks like in the workplace. Gaslighting, as per the Oxford dictionary definition, is as follows:

“To manipulate (a person) by psychological means into questioning his or her own sanity.”

Sounds pretty harsh, right? Gaslighting is a behavior that can be quite damaging to the victim. Imagine not knowing what’s real. Questioning your own sanity. Am I crazy? Do I need help? Gaslighters work hard to ensure that you never realize it’s them causing the problems. The transfer of blame goes to you, because everything will become your fault so that you’re easily manipulated.

You can expect guilt-tripping, lying, distortion of facts, and more from a gaslighter. Whatever it takes to throw your emotions, insecurities, and shortcomings back in your face and shift the blame from your manipulator to you. It’s that serious.

Often, the gaslighting dynamic in the workplace is between a person in a position of power and their subordinate. This makes it easier to achieve that manipulation; after all, they’re the boss, so you shouldn’t question them, right? They have much more power to throw around to achieve their goals.

Let’s make one thing clear: gaslighting for any reason under any circumstances is nothing less than toxic behavior and is not ok. There’s simply no positive motivation behind a behavior like gaslighting and its associated behaviors like lying and guilt-tripping.

The first step to combatting this kind of manipulation and abuse is keeping accurate records. Gaslighters often use tactics to make their victims question the very reality around them. For example, let’s say you know in your heart that your boss said the project you’re working on was due on Wednesday. Come Wednesday, he works hard to make you understand it was actually due Monday. He makes you feel bad for missing the deadline, talks about how you can’t manage time and you’re awful at deadlines, and general shames/guilts you into submission.

But wait…you’re certain he said Wednesday. Could you be wrong? Did you hear him wrong? Keeping records can prevent this sort of self-doubt and expose your gaslighter. If you’d sent a follow-up email to confirm the due date, you’d have hard evidence that you were right to begin with.

Let me clarify; this isn’t about who’s right and wrong. It’s about exposing your gaslighter’s behavior and keeping your sanity intact. Your gaslighter will use any means necessary to enforce their point and prove that you’re wrong, not them.

You can also keep records of your interactions with a suspected gaslighter. When did they visit your office? What was said? What instructions/tasks/projects were assigned, and what are the details? The more accurate your records are, the more strong your case will be when you bring it to your supervisor or HR manager.

Setting boundaries at work, especially with a boss or supervisor, can be challenging; especially if they’re a gaslighter. Gaslighters will most likely ignore or circumvent your boundaries to continue their toxic behavior, but the important thing is that you set those boundaries and document that they’ve been set. Once you set a boundary and someone continues to violate it, it’s not only disrespectful, it’s also harassment.

Eventually, you’re probably going to have to take your case above your supervisor’s head. This can lead to some negative feelings on both ends, and even retaliation. Gaslighters don’t like to be exposed, and certainly don’t like to face the consequences of their actions. Remember to keep documenting their behavior, even after you’ve gone to HR.

Any negative reactions or retaliation of any sort should be documented and reported immediately. Remember, you’re a valuable person. You don’t deserve to be treated this way in your workplace, your home, or anywhere else. Gaslighting is harmful and wrong and should not be tolerated.

The post How To Handle Gaslighting In The Workplace appeared first on ValueWalk.