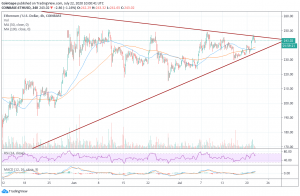 Ethereum price again proved its correlation to Bitcoin price has grown stronger. The largest altcoin remained motionless even when smaller altcoins were rallying in the first two weeks of July. Ether ignored a possible rally even though its fundamentals were extremely strong. Instead, the price first consolidated around $240 before breaking down to $228 support.

A reversal from the support at $228 coupled with the spillover from Bitcoin’s spike above $9,400, pulled Ethereum past the critical $240. The resistance in the first week of July at $245 still stood its ground, limiting the action targeting $250.

Ethereum bulls also pushed for a breakout above the symmetrical triangle pattern. However, the snag at $245 keeps delaying the much-anticipated symmetrical triangle breakout. A breakout of such stature, if supported by the right volume could easily bring down the resistances at $250, $260 and ground-start a rally targeting $280.

For now, Ethereum is trading at $244 amid a growing bearish grip. If the bulls fail to rise above the immediate resistance at $245, a breakdown to $240 is likely to come into the picture in order to create fresh demand at a lower price.

From a technical perspective, bulls have not entirely lost their balance. Buying pressure is present only that it is not enough to sustain action above $245. The MACD is still in the oversold after crossing above the midline. The RSI is commencing sideways motion, signaling for consolidation at $244. Consolidation is key as long as buyers do not lose sight of the essential triangle breakout as well as the resistance at $250.