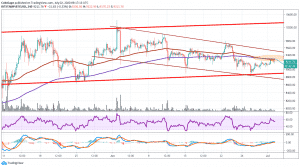 BTCUSD is still trading in the huge channel where it has just confirmed the lower line of the channel and is now building a range here. Above 9000 USD level BTCUSD has still some good support where it can build more potential BTCUSD has touched the 200 and 100 EMA and is testing them which is normally a bullish sign where when bitcoin manages to go above these levels can confirm bullishly and move higher.

The paypal announcement to sell bitcoin to its over 250 million customers was a big deal for bitcoin this is why there can come a
boost in demand as paypal going to increase the promotion and adaptation.

On the bearish side, it is important for bitcoin to hold the lower line of the channel and confirm it otherwise there can come
a bearish breakdown when BTCUSD fells below that level.

The RSI is sending moderate signs where an oscillation to the higher or lower boundary will confirm the proper trend which is more likely a bullish trend at the moment of the outcome.