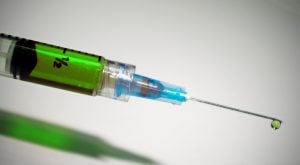 Bill Gates says a company that’s working on a COVID-19 vaccine can produce 200 million doses by next June. SK Bioscience is a South Korean company backed by Gates, who wants to cooperate with South Korea on producing the coronavirus vaccine.

The Bill and Melinda Gates Foundation gave $3.6 million to SK Bioscience in May to speed up work on the COVID-19 vaccine. In addition to working on its own candidates for a coronavirus vaccine, the South Korean company is also a contract manufacturer for AstraZeneca, which is working on its own vaccine candidate.

Bloomberg reports that Bill Gates made the comment about the 200 million COVID-19 vaccine doses in a letter sent to South Korea’s president. An official with the president’s office reported on the comment but did not elaborate further on what else the letter said.

Other vaccine candidates in the works

Companies around the world are working on hundreds of vaccine candidates to prevent COVID-19. AstraZeneca’s vaccine candidate is being developed in collaboration with Oxford University. It’s in the third and final stage of human trials and is one of the leaders in the race for an effective coronavirus vaccine.

It’s unclear just where SK Bioscience stands on its vaccine candidate, but Gates’ letter to the South Korean president suggests the company may be quite far along. A handful of vaccine candidates are in the final testing stages, which means they are getting close to entering production.

Health officials and the Gates couple hope an effective COVID-19 vaccine can be finalized by the end of the year. Given the number of promising candidates that are in the final stages of testing, that timeline is possible.

After a vaccine candidate is finalized and approve, it must then enter production. If SK Bioscience products 200 million doses of its COVID-19 vaccine by June 2021 as Bill Gates said it could, it’s unclear whether the company would also have the capacity to produce AstraZeneca’s vaccine at the same time.