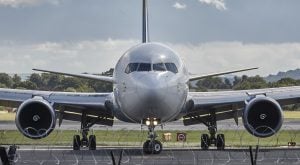 Google Using A Fleet Of Private Planes To Traverse The Globe

WASHINGTON, D.C. – Today, Campaign for Accountability (CfA), a nonprofit watchdog group that runs the Tech Transparency Project (TTP), released the first in a series of reports outlining how Google’s parent company, Alphabet, uses a sprawling fleet of private planes to traverse the globe, despite the company’s public pledges to fight climate change. According to TTP’s investigation, Google’s collection of aircraft has included 10 Gulfstream jets, two Boeing airliners and a military-style German fighter jet.

These aircraft collectively have flown more than 13 million miles since 2005, according to a TTP analysis of flight data — emitting approximately 332 million pounds of carbon dioxide. A passenger traveling in economy class on a commercial airline would need to circumnavigate the globe more than 32,000 times — or once a day for over 88 years—to approximate the same carbon footprint.

The Fight Against Climate Change

CfA Executive Director Daniel E. Stevens said, “Google positions itself as a leader in the fight against climate change, but its reliance on private planes tells another story. Despite Google’s public image as a responsible steward of the environment, its executives have racked up enormous carbon emissions by using private planes to crisscross the globe.”

While many large corporations use private planes for their executives, few of them have made the fight against climate change such a part of their public image. Still fewer have amassed such an extensive fleet of jets of all types and sizes. In fact, FAA records show that Google’s planes took many short flights that could easily have been made by car. TTP identified more than 700 Google flights between airports located within 100 miles of each other.

The flight records also reveal apparent vacation destinations of Google executives. Since 2005, the top destinations for Google’s planes included Nantucket, Montana, the British Virgin Islands, and several spots in the South Pacific, including Tahiti, Fiji, and Palau. Washington D.C. was also a popular destination—one of the top five in eight of the past 11 years. The trips to Washington increased between 2009 and 2011 as Google started to face increased scrutiny from government regulators.

This report is the first in a series of articles resulting from TTP’s investigation of Google’s use of private aircraft. TTP discovered this information through an investigation that uncovered an extensive fleet of planes tied to Google and its executives, often held through shell companies. TTP also secured FAA flight records through extensive open-records requests.

Forthcoming TTP reports will detail the ways in which Google uses its fleet to exert soft power both in the U.S. and abroad, from Montana all the way to China. TTP is today making public its full dataset for researchers and interested parties to explore.

Campaign for Accountability is a nonpartisan, nonprofit watchdog organization that uses research, litigation, and aggressive communications to expose misconduct and malfeasance in public life and hold those who act at the expense of the public good accountable for their actions.