1) Despite the unprecedented job losses and massive recession, the Nasdaq Composite Index closed at an all-time high yesterday, up more than 40% from its March lows… and the S&P 500 Index is now in positive territory this year.

It’s hard to believe that we’re only two and a half months removed from the utter panic of late March, when I took my personal account from 15% cash to more than 80% invested and was pounding the table that it was the best buying opportunity since the global financial crisis…

On the day the market bottomed on March 23, under the headline “Why this is the best time to be an investor in more than a decade,” I wrote in my daily e-mail:

I’ve been spending every waking moment over the past week preparing for the free webinar that my colleague Enrique Abeyta and I are hosting tomorrow night at 8 p.m. Eastern time on the coronavirus crisis and its implications for investors.

I’ve given hundreds of presentations over the years, including many in which I warned investors about the great financial crisis long before the storm hit.

During the webinar, we’ll explain, in great detail, why we’ve come to the firm conclusion that this is the absolute best time to be an investor in more than a decade. To borrow a phrase from one of my friends, “we’re trembling with greed” right now.

Had you told me then that our recovery from the coronavirus crisis would be as halting and tepid as it’s been (which I covered in last Tuesday’s and yesterday’s e-mails), I would have guessed that the market might be up 10% to 20%, not 30% to 40%…

This certainly underscores the adage, “Don’t fight the Fed.” By that I mean that this rally is primarily being driven by the unprecedented liquidity being pumped into the market rather than a strong economic rebound (notwithstanding Friday’s stunning jobs report).

To be sure, we’re going to work our way through the economic crisis that we’re in – never bet against America! – but the damage has been deep and the recovery is going to take years, as this insightful article documents: Don’t Lose the Thread. The Economy Is Experiencing an Epic Collapse of Demand.

Stock Prices Are Ahead Of The Fundamentals

2) So what should a prudent investor do?

I think stock prices are now ahead of the fundamentals, though I’m not yet convinced that the entire market is in a bubble. And, as Enrique argues persuasively (see Thursday’s e-mail), the combination of improving economic news and unprecedented liquidity could drive stocks even higher in the near team.

So I’m just doing a little trimming to remain 65% invested in my personal account. Specifically, I sold another half of my basket of airline stocks yesterday – it’s down to a 1.3% position now (I discussed my initial sale in Friday’s e-mail).

But I’m liking that 35% cash more and more, as foolishness in the markets grows and grows…

3) Any bull market has speculative bubbles, which I try to identify and warn my readers about.

In the past few years, I’ve done so in the cases of alternative energy stocks, bitcoin, and pot stocks. But the bubble over the past week in bankrupt (or near-bankrupt) stocks may be the craziest thing I’ve seen since the Internet bubble.

Take a look at the gains in these stocks yesterday:

Every one of these stocks isn’t just likely to decline… they’re all ZEROS!

This insanity is being driven by individual investors day trading and speculating like crazy. Take a look at this chart from Robintrack of Hertz’s stock price since April… You can see that the 10-fold increase in the stock price in the past two weeks, from $0.55 to $5.50 per share, correlates precisely with the number of accounts holding the stock at Robinhood going from 44,000 to 142,000:

It saddens me to see this because while this bubble (so far, anyway) remains microscopic in size, it’s still a few billion dollars that these investors are sure to lose – and I suspect these are losses these folks can’t afford during these tough times…

Chesapeake Energy Is A Zero

4) As another example, take a look at Chesapeake…

After rising more than 400% in the past week, it had a market cap as of yesterday’s close of nearly $700 million. This is despite the fact that some of the company’s bonds trade at seven cents, as you can see in this chart of a $2.2 billion bond that’s due on January 1, 2025: 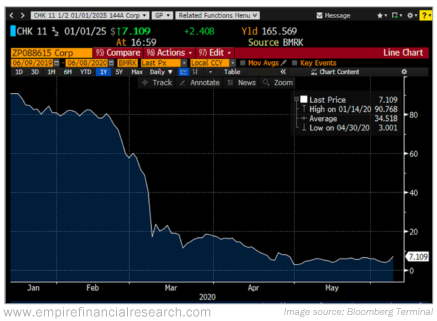 Keep in mind that bonds are senior in the capital structure to the equity (stock), so these bondholders would need to get 100 cents on the dollar before shareholders get anything.

It ain’t gonna happen, folks – not for Chesapeake or any of these companies.

This became even more clear yesterday when Bloomberg broke this story: Chesapeake Plans Bankruptcy With Exits Closing on Shale Pioneer.

The stock is halted and is indicating down big, but it should be down 99% – as it’s now all but certain that it’s worthless.

What could possibly explain this insanity? I think Nate Anderson of Hindenburg Research nails it in this tweet:

As my friend and former partner Glenn Tongue wrote to me yesterday:

I’ve never seen or read about a bigger disconnect between bond and stock prices. This is not General Growth Properties during the global financial crisis, where there was a strong likelihood of substantial recovery for the equity. This is pure and simple gambling – like betting on a horse mid-race after it’s fallen and broken its leg, in the hopes it will get up and still win the race.

The post Whitney Tilson: The Following Stocks Are All Worth ZERO appeared first on ValueWalk.