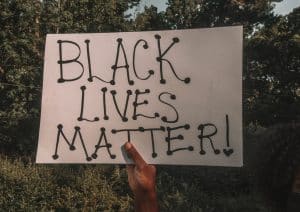 A new token allegedly honoring George Floyd is out and about in the market. “George Floyd Token” aka FLYD is an ERC-20 project that aims to support protesters engaged in the riots happening across the United States of America.

While the world believed that carnage caused by the deadly Covid-19 was the only hiccup this year, the death of George Floyd left people spiraling. The 46-year old man died on 25 May in Minneapolis, after a police officer thrust his knee against Floyd’s neck for almost nine minutes long. This police brutality against an African American was captured on video and went viral in no time. While nationwide protests demanding justice for Floyd has been going vigorously for 10 days, slogans such as “Black Lives Matter” has been widely used.

As these protests enter its tenth day, news of the four officers involved in the death of George Floyd being arrested, broke out earlier today. Amidst the fight for justice, a George Floyd Token which is also known as FLYD made an entry into the market. As per the token’s website, the creators have chosen the Ethereum network and the total supply of the token stands at 612,000,000. Additionally,

The website suggested that the token was formulated to ensure that George Floyd’s name would “live forever” via decentralized platforms. It read,

“…our decentralized network that will offer support for protestors and those who face injustice from police and governments alike. We intend for others to use our platform to access the limitless world of crypto currency for settling bail and helping others during their time of need.”

Furthermore, the token’s whitepaper is still underway and is expected to be released at 17:00 ET on 6 June 2020. While the website claims to donate a share of proceeds to George Floyd’s family as well as the “Black Lives Matter” movement, the token does not explain the use of FLYD as a payment method. Suspicion exceeds as the creators have mentioned details pertaining to airdrops for the token, however, everything else on the page including the ‘Terms and Conditions’ and ‘Privacy Policy’ is not yet set up.

A Twitter handle was also created for the token, through which details pertaining to the airdrop were shared. The tweet read,

Additionally, during these protests, many were seen holding up posters in support of Bitcoin. Several from the community also suggested that Bitcoin was the right kind of protest. One of them was Binance’s, Changpeng Zhao, who tweeted,

“#Bitcoin is the peaceful protest.”

Another protester was photographed holding a sign that read, “Bitcoin will save us.”

While the entire world has been mourning George Floyd’s death, several scammy platforms set up drives and collect donations with an intention to make money. Even though the cause of the George Floyd Token is in the right direction, its legitimacy remains uncertain.