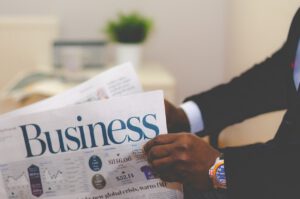 Buy-and-Holders believe that stock prices are determined by millions of rational investors reacting to economic developments. Shiller’s research shows that investors are not so rational as we once thought. It takes nothing more than irrational exuberance to produce high stock prices.

The Reflection Of Economic Developments In Price Changes

Because Buy-and-Hold has been the dominant model for understanding how stock investing works for a long time now, most of us imagine that economic developments are quickly reflected in price changes. The development takes place, investors take note of it, and market prices reflect it. It’s a quick process. If some investors were slow to incorporate the new development into their thinking, others would jump in to exploit the delay.

Say that evidence appears that the economy is stalling out. The logical response would be for investors to pull stock prices down. But what if investors are in circumstances in which even a small price drop could be dangerous? If stock prices had been high for some time before the bad economic news appeared on their radar screen, they might be concerned that acknowledging the bad news would bring on not only the price drop justified by the bad news but also the larger price drop that was waiting to be triggered by some such development before this particular bit of bad economic news appeared on the scene. In that scenario, investors might elect (not being conscious that this is what they were doing) to delay recognition of the negative economic development.

Can I prove any of this?

I cannot. We cannot see into investors’ minds.

But, given Shiller’s showing that investors are not 100 percent rational but in fact sometimes highly emotional, I think that this way of thinking about how stock price changes are achieved is more realistic than the Buy-and-Hold take on the subject. The Shiller-influenced take suggests that price changes are not immediate responses to economic events. Market prices do not adjust each day to the new realities that apply. The market has a memory. It considers what has happened at earlier times when processing the latest economic developments.

Most investors are worried about where stock prices are headed in the near future because of the possible effect of the coronavirus. I believe that a big influence on their thinking will be their understanding of what happened during the last occasion in which we experienced an economic crisis. In late 2008 and early 2009, many investors were terrified to see much of their life savings disappear from their portfolio in a short number of months. But most investors followed the Buy-and-Hold injunction to stay the course and were rewarded for their fortitude. Prices recovered and quickly and super high valuation levels have applied ever since.

That experience should help many investors to tune out voices of doom (like mine!) this time around. Investors who lived through that earlier experience will tell themselves that staying the course worked well then and is the best option for another trying time.

But the next psychological step might take things in a very different direction. If investors are sufficiently worried that in other circumstances they would lower their stock allocations but decline to do so because of their experience in the 2008 crisis, what happens if this time prices do not recover quickly? They might conclude that something has gone wrong and that the stay-the-course wisdom no longer applies and react emotionally to that disturbing thought. An investor who has held off on lowering his stock allocation for some time may elect a bigger move out of stocks when he finally works up the courage to make a move. If millions of investors reach a similar conclusion at the same time, the price drop could be severe.

I am not trying to leave the impression that I have this sort of thing all figured out. There is much that we do not know about how stock investors react to economic developments and price changes. What I am suggesting is that we should be making an effort to incorporate Shiller’s Nobel-prize-winning findings into our thinking about the subject. Shiller is saying something different about the subject than what people believed about it at the time that the Buy-and-Hold Model was developed. If we are to develop a sound understanding of what is happening to our money and to the economic system that is affected by big price changes, we need to come to terms with what his research teaches about all sorts of questions that we once thought had been settled.

The post The Market Does Not Process New Information Quickly appeared first on ValueWalk.