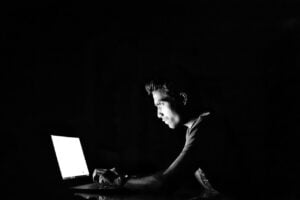 First, this is a must-read first-person account from a Black man in Detroit who was falsely arrested in front of his wife and children and spent a night in jail after he was misidentified by a racially biased facial recognition algorithm. He is now calling for a ban on the technology.

Fight for the Future has been leading a national coalition of dozens of prominent organizations who are calling for a Federal ban on all law enforcement use of facial recognition surveillance. More than 75,000 people have called on lawmakers to act through our tool at BanFacialRecognition.com and related efforts.

Evan Greer , Deputy Director of Fight for the Future sats: “What happened to Robert Williams and his family should be a wake up call for lawmakers. Facial recognition is doing harm right now. This is not some Orwellian technology of the future. This is happening today. And lawmakers need to act today to ban the use of this dangerous, racially biased, and invasive technology that only serves to automate and exacerbate existing forms of discrimination in policing. This is only the first case that has come to light. There are almost unquestionably people sitting in jail right now who were put there because they were falsely accused by a racist computer algorithm. Enough is enough. It’s time for Congress to do their job and ban facial recognition surveillance in the United States.”

Take a look at the so-called ‘Lawful Access to Encrypted Data” introduced by Senator Cotton, along with Lindsey Graham and Marsha Blackburn. This bill is an absolutely absurd proposal that would force government backdoors into encryption technologies, something that security experts have warned over and over again is extremely dangerous, will do nothing to stop horrific crimes like child exploitation, and will put everyone at risk in the process. Frankly, this bill seems like a red herring / cynical attempt to make the similarly misguided EARN IT act seem like a reasonable compromise. Whereas the EARN IT act is a thinly veiled sneak attack on end-to-end encryption, this new bill is an out in the open frontal assault.

Greer says “Politicians who don’t understand how technology works need to stop introducing legislation like this. It’s embarassing at this point. Encryption protects our hospitals, airports, and the water treatment facilities our children drink from. Security experts have warned over and over again that weakening encryption or installing back doors will make everyone less safe, not more safe. Full stop. Lawmakers need to reject the Lawful Access to Encrypted Data act along with the EARN IT act. These bills would enable mass government surveillance while doing nothing to make children, or anyone else, any safer.”