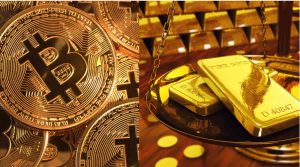 Gold futures gained on Thursday as global socio-economic tension continue to linger. The price bounced back above $1700 after a two-day fall as the tension between the U.S. and China along with riots in the states have continued to create a tensed environment.

The stocks opened slightly lower (negative 0.2%) today for the first time since the #BlackLivesMatter protest began in the U.S. Tone Vays, derivatives and crypto trader noted in his daily trading update,

Stock market is down, gold is up. They are acting with a somewhat negative correlation

Moreover, it is more than just an intuitive correlation as the naysayers have been criticising the stock market uptrend for quite some time.

Will Bitcoin Keep Up?

Bitcoin also opened positive today despite the severe crash from $10,000 on Tuesday. BTC price has corrected 60% to the upside from lows at 9135 as the price dipped from $10,200 in a matter of minutes. Crypto analytics research firm, Coinmetrics noted in its update,

The correlation between gold has consistently maintained relatively high levels for several months now, a phenomenon that has not been historically observed.

The price of Bitcoin [BTC] at

Both these assets indicate the formation of bullish accumulation levels, after swift recovery from the coronavirus crash. Fundamentally as well, Bitcoin traders would look to react based on the price movements in gold. Micheal Novogratz, a billionaire investor and founder of Galaxy Digital recently noted,

All the tragic turmoil in the USA adds to the narrative. Budgets are going one way and it’s the opposite of balanced. When 10k goes it will move fast. Get on the train. Also, watch Gold vs Bitcoin. If that chart breaks higher it will turbo boost Bitcoin.

This the longest time since the 2017 peak in crypto markets, that the correlation between gold and bitcoin has been positive (though only weekly correlated.) Moreover, Bitcoin investors seem to be separating themselves away from the risk component which is evident in the bullish sentiments despite the volatility on Tuesday.
Nevertheless, for the ones who have been watching the space for a while know better than to fight the feds. The $7 trillion dollar injections have pushed to stock markets at par with the highs before the crash. Although the gains in the stock market are lower than Bitcoin and gold, at the moment, the momentum of equities is with the buyers as well.
Do you think that the inverse trend between gold and stock markets will ensure or there is more upside to stocks? Please share your views with us.