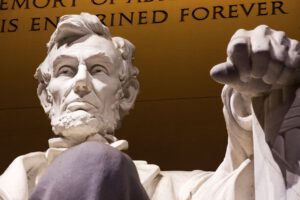 I think I’ve done more for the Black community than any other president, and let’s take a pass on Abraham Lincoln, cause he did good, although it’s always questionable. – President Donald Trump, June 12, 2020

Would President Lincoln Compare Himself To Trump?

Try to imagine our history running in reverse – from the present to the past, from the age of Trump to the age of Lincoln. Would President Lincoln have spent a lot of time comparing himself to President Trump, who considered himself another “wartime president”?

Surely Lincoln would have been amazed that in Donald Trump’s America – especially in the Southern states, where Trump was especially beloved – Blacks were actually allowed to vote, and even to hold political office.

Would Lincoln, who may have been the first president to have been photographed, have considered doing a photo op at the Trump Monument – perhaps inspired by Trump’s own photo op in front of a small church, a short walk from the White House?

Lincoln, aka Honest Abe, knew that he had a lot to learn from Mr. Trump, especially from his business dealings. Perhaps he even kept a copy of The Art of the Deal on his nightstand for ready inspiration.

Trump’s insistence on giving the 2020 graduation address at West Point was something that all subsequent presidents could learn from. Calling back the 1,100 cadets to West Point in the middle of a deadly pandemic was an amazingly selfless act.

Not only did he deliver a speech of perhaps unparalleled inspiration, but he truly pushed himself to his physical limits by managing not only to not slip while walking down a ramp, but also heroically raising a glass to his lips without spilling water on his tie.

Let’s consider why Trump may actually believe he did as much, if not more, for Blacks than Lincoln. He did sign the “First Step Act”, which reduced federal prison sentences and resulted in the early release of thousands of prisoners – many of them African Americans. But only ten percent of our nation’s prison population is housed in federal prisons – the other ninety percent are housed in state prisons.

The greatest legal advances since the 1860s for African Americans came in the mid-1960s, during the height of the civil rights revolution led by the Reverend Dr. Martin Luther King Jr. Legislation that had first been formulated by President John F. Kennedy, and then pushed through Congress by his successor, President Lyndon Johnson, ensured Black voting rights throughout the nation, as well as the right to run for and hold political office, eat in any restaurant, stay at any hotel, and even use any public bathroom.

So, to lend a bit of perspective, President Lincoln freed the slaves, Kennedy and Johnson provided the civil rights revolution with its legal foundation, and Trump reduced the prison sentences of a few thousand people.

Trump second claim to have been good for Blacks is that during the first three years of his presidency the unemployment rate of African Americans fell to a historic low. Granted, while most of the recent decline had taken place during the eight years of Barack Obama’s presidency, President Trump has never been known for sharing credit.

Still, if American Americans never had it so good as they did during the first three years of Trump’s presidency, then they never had it so bad as they have during the its fourth year. To understand why, we need to consider a strong historical relationship between white and Black unemployment rates over the last seven decades. During that period, the Black unemployment rate has consistently been double the white rate.

Right now, the nation’s unemployment rate is estimated in the mid to upper teens. But perhaps one out of three African Americans is unemployed. If they never had it so good during Trump’s first three years, they may never have had it so bad during his last year in office.

When President Lincoln formed his wartime cabinet in 1861, he chose for his cabinet what historian Doris Kearns Goodwin termed a “team of rivals” – which included other men who had vied with Lincoln for the presidency. By contrast, Trump’s revolving door of cabinet members was expected to be completely loyal, and to shower him with praise, especially at cabinet meetings.

In a twist of history, had the members of Trump’s revolving door cabinet had had the opportunity to meet the Great Emancipator, each might have said to him, “Donald Trump is a friend of mine, and you’re no Donald Trump!”

The post Abraham Lincoln Was No Donald Trump appeared first on ValueWalk.