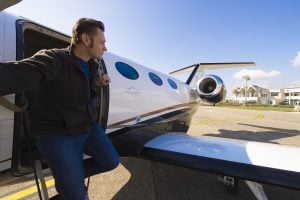 WASHINGTON, D.C. – This week the Trump Treasury Department revealed the latest recipients of the CARES Act’s $25 billion bailout carveout for airlines, and private jet companies were the big winners at a time the industry “has experienced a peak in demand due to the near-total shutdown of commercial aviation.” Of the 96 newly announced bailout recipients, at least 44 are private jet companies that received $104,805,726 in taxpayer money, according to an analysis by Accountable.US, the government watchdog group behind TrumpBailouts.org.

Among the beneficiaries is Jannus Air, “The only on demand private air charter service based on Martha’s Vineyard.” Key Lime Air Corporation – which caters to “clientele ranging all the way from elite political officials, celebrities, collegiate sports teams, corporate executives and beyond” — received over $4.5 million in taxpayer aid. Xtra Airways, which has profited off deporting undocumented immigrants on behalf of the Trump administration, took off with $500,000. And Clay Lacy Aviation took home $27 million after its CEO reportedly contributed $50,000 in support of the President.

“It’s no wonder the President says he’s in ‘no rush’ to deliver more help to the tens of millions of workers who just got pink slips,” said Jeremy Funk, spokesman for Accountable.US. “He was too busy lining up over $100 million for the private-jet industry that caters to the ultra-wealthy and is flying high thanks to recent tax breaks. Instead of handing out platinum parachutes to the luxury travel industry, the President needs to start focusing on Americans stuck at home who are struggling to pay rent and feed their families.”

The bailouts come after the private jet industry experienced a market “frenzy” under the 2017 Trump tax law loophole allowing CEOs to “deduct 100% of a new or used plane’s cost on their tax returns.” And the CARES Act also rewarded them with exemptions from Federal Excise Taxes and jet fuel taxes among other giveaways.

It took weeks for President Trump and his congressional allies to acknowledge the incalculable health and economic threat posed by the global coronavirus outbreak. When they finally did, their first order of business was to reassure wealthy corporations that they would be taken care of. That is why, at their insistence, the CARES Act included $500 billion for billion-dollar corporations with few restrictions on those that can apply. Accountable.US has been tracking COVID19 stimulus money on TrumpBailouts.org.

The post Half of Trump’s Latest Corporate Bailout Went to Private Jet Companies appeared first on .