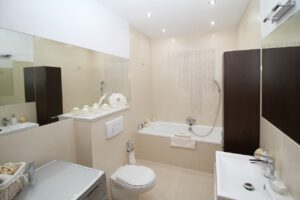 WASHINGTON, D.C. (May 20, 2020)  COVID-19 could pressure our society into making major changes even after the immediate crisis eases, and a surprising one may be in the way both public restrooms and home bathrooms could be modified to reduce the spread of germs, including this deadly virus, or any others in the future.

Redesigniing Restrooms To Fight The Spread Of Coronavirus

Indeed, as the Washington Post just reported, “one of the biggest obstacles to dining in a restaurant, renewing a doctor’s appointment or going back to the office is the prospect of having to use a public restroom – a tight, intimate and potentially germ-infested space.”

These changes could also, as additional benefits, provide more privacy for all users, help transgender individuals, and move towards equal waiting time for both genders, says professor John Banzhaf, an MIT-educated engineer and inventor, who has been called the “Father of Potty Parity.”

It has long been known that, when any toilet is flushed, it creates a “toilet plume” aerosol (spray) which aerosolizes the bowl’s contents unless the lid is closed.

Such germ-laded plumes can travel 6 feet in every direction, coating the user’s own hands and face, as well as his or her clothing, and also going up and down into the next toilet stall in a public restroom.

While long overlooked and tolerated because the consequences may not have been seen as very serious, it has now become a deadly risk for others, especially since the CDC has reported that the coronavirus has been found in the feces of some patients with COVID-19.  Another study found that the virus survived in some patients’ fecal matter longer than in respiratory samples.

Also, experts say that no amount of handwashing will remove a virus sprayed all over a person’s body by such a toilet plume.

OSHA does not even require that there be lids on toilets in the workplace or in places of public accommodation, so even a conscientious toilet user cannot eliminate this plume, which can be deadly because of the coronavirus.

One obvious initial solution would be, at the very least, to require that there be lids on all toilets in workplaces and public places.

But it also appears that most people do not always lower the lid when flushing, even in their own homes, much less in public places, in those rare restrooms where there are lids which can be lowered.

The best solution, suggests Banzhaf, might be to have a no-touch flushing mechanism (to eliminate contact infection), or even an Alexa-like voice commend system, which automatically lowers the lid before the toilet is flushed if the user isn’t seated on it at the time.

Such no-touch or voice-activated mechanisms can – and arguably should – also be used in public restrooms for sinks, soap dispensers, towel machines, etc. to further reduce the spread of the virus from infected surfaces.

It would also be easy for the no-touch mechanism to not permit the toilet to flush at all if the seat detects weight upon it, or if the lid were raised at the time.

An additional option would be for the toilet to signal the user – with a light, a sound, or even a recorded voice – to lower the lid once he tries to flush if the lid is still up.

Another technique for limiting the problem of germ-laden aerosol plumes in multi-stall public restrooms would be to adopt the stall design – more common in Europe – in which the door and the stall walls extend to the floor, and perhaps couple that with a door and stall walls which are significantly higher than customary in the U.S.

Such steps would help to contain the virus and other germs which might be present in the aerosol, and also provide much more privacy to users.

Indeed, this would also greatly facilitate the small but growing movement towards having multi-user restrooms, which are open to all genders, where the privacy of patrons is protected by stall walls and doors which begin at the floor level and reach higher than most do now.

Such multi-user all-gender restrooms, to which many younger patrons are accustomed from having used them in coed dormitories, are increasingly being used in many buildings on college campus, as well as in some restaurants and even workplaces.

And even older users will remember the unisex restroom which played an important role in the TV program about lawyer Ally McBeal which ran for 5 years in the late 1990s.

Such a redesign and movement towards all-gender multi-user public restrooms would also eliminate the concerns of transgender users, and also solve the problem of achieving potty parity.

If everyone waited on the same line to use the same toilets enclosed in stalls in all-gender restrooms, women would no longer have to wait much longer than men to perform basic hygiene functions in public places, says Banzhaf.

This would be a major victory for “Squatters’ Rights” and “Restroom Equity” (alternative phrases for “Potty Parity”), and eliminate the need for women to wait in what some have called peegatory, Banzhaf quips.

Looking into the future, we might also expect manufacturers to modify high-ed existing and future disease-detecting “precision health” toilets for home use to detect the coronavirus. and also other viruses which may create major contagion problems someday.

Such “smart toilets” can already detect a range of disease markers in stool and urine, including those of some cancers, such as colorectal or urologic cancers.

With modest modifications, such devices might also be able to detect dangerous viruses.

This would be consistent with the growing use and adaptation of technology known as continuous health monitoring, which encompasses wearables such as smart watches, says Banzhaf, who also pioneered the use of CPAP and similar breathing devices to help save the lives of COVID-19 patients who are in respiratory distress but do not need – or do not have access to – ventilators with their greater power and sophistication.

The professor is now promoting the use of such devices, which are inexpensive and can be run off automobile batteries where electric power is unavailable or unreliable, in many African countries now being hit with an exploding number of COVID-19 patients, and a very severe shortage of conventional ventilators.

The post COVID-19 Could Trigger Restroom and Toilet Re-Design appeared first on ValueWalk.