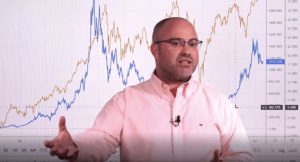 The COVID-19 ‘Black Thursday’ crash on March 12th began a strange, but strong positive correlation with the stock markets (0.6 at the peak) which now seems to be fading away. Moreover, the uptrend in both assets in the following weeks despite bearish sentiments further baffled the traders. Fundamentally, Bitcoin is looking to poise itself as a hedge against the crisis, but stock markets and recession in the economy threaten another blow-out in prices.

The Chairman of the U.S. Federal Reserve issued an alarming warning on the onset of recession in the economy. He addressed the media,

“The record shows that deeper and longer recessions can leave behind lasting damage to the productive capacity of the economy,” Powell said. “Avoidable household and business insolvencies can weigh on growth for years to come.”

Powell indicated the onset of negative interest rates and increasing the spending of the Feds to deal with the massive shock due to Coronavirus.

While Trump believes that the economy could snap back into recovery mode as the worldwide lock-down ends, Powell expects more lasting impacts. The SPX index plunged over 20 points yesterday post his address, down 4.01% on a weekly scale. The Dow Jones index plunged 2.17% with a 516 point drop.

Bitcoin, on the other hand, is up 7% on a weekly scale as it revisits bullish territory with a 7% rise on a weekly scale. It gained over 5.58% yesterday, despite the downtrend in the stock markets.

While decoupling have been established in the short-term, Mati Greenspan, financial analyst and founder of Quantum Economics apprehends a pullback. According to him, halving has caused non-correlated moves in Bitcoin price. He tweeted,

If nothing else, the #halvening has decoupled bitcoin from the stock markets. Since the event, orange coin is up 8% while the US stock market is down 4%.

Bitcoin [BTC] Vs. SPX Price Action (Source: Twitter)There is massive volatility in Bitcoin price at the moment, which gives rise to uncertainty. And, the bearish sentiments could invoke the risk component around Bitcoin as well. Greenspan notes in his daily newsletter,

Of course, as has been the case from the beginning, the virus is firmly in charge of the markets now, so a spike in case data or other risk events like overwhelming mortgage delinquencies or major bankruptcies could see the correlation snap back in a moment.

How do you think the markets will perform after the unemployment numbers at the end of this week? Please share your views with us.