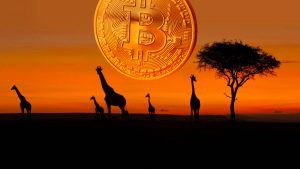 Heading into one of the most important weeks in BTC’s history – third halving event – Africa is showing great steps in adoption with record volume levels recorded over the past week. Can Africa lead adoption post-Bitcoin halving?

Africa is silently leading the Bitcoin adoption across the world as the peer to peer volumes recorded hit record highs over the past week. According to data aggregator, UsefulTulips.org, the weekly volumes traded across Sub-Saharan Africa hit $10 million for the first time ever signaling a growing utility value in Bitcoin across the continent.

The growth leads any other continent signaling a tide shift in the ownership and usage of BTC across the world. With developing nations touted to benefit most from the advantages BTC offers, Africa is surely taking the lead in this respect. Can the continent lead the world in a fully-fledged Bitcoin-based economy in the future?

In a record week in peer to peer volumes (P2P), volumes across Sub-Saharan Africa is a welcome sight to any Bitcoin enthusiast. The continent, which has had a rather slow start in the adoption of BTC is finally picking up the pace with $10.2 million worth of BTC exchanged across LocalBitcoins and Paxful in the past week.

[1/5] Holy Smokes! Sub-Saharan Africa had its first 10M voume week ever on P2P exchanges, stomping the weekly record set in Dec 2017! The volume is likely a bedrock of utility use with a substantial bump of speculation related to the halvening: pic.twitter.com/CTIAoFbSRf

Nigeria heavily dominates the volume trading a record-high $7.2 million in BTC, representing a mammoth 22% increase over the past week. The largest economy in Africa is leading the Bitcoin revolution with P2P trades setting record highs as Bitcoin’s halving event FOMO reaches fever pitch.

Kenya, one of the countries with the highest digital mobile user rates in the world, lies second on the list setting a record of $1.6 million in weekly Bitcoin trades over Paxful and LocalBitcoins. For context, during the massive 2017 bull run that sent BTC to $20,000, the highest weekly volumes stood at $764,000.

The ease of buying and selling BTC P2P in Kenya using the digital mobile bank service, MPESA, has seen the country adopt BTC faster than any other country across the continent.

South Africa and Ghana close out the four largest P2P traders of BTC across the continent with weekly volumes of $1.1 million, and $794,000 respectively. This represents a 20% and 38% increase from April’s final week volumes.

Would History Repeat With Bitcoin Halving 3.0?

The previous halving in 2016 caused a rapid rise in the volumes traded on P2P exchanges across SSA – from $1.7 million in December 2016 to a peak of $9.7 million a year later. Can SSA lead the global adoption rates after the third BTC halving?

Well, during the last halving only LocalBitcoins provided P2P services to SSA Bitcoin users but the field has since grown including Paxful, which is taking up a massive amount of market share, especially in Kenya and Nigeria. Moreover, several exchanges including Binance, Crypto.com and South Africa’s Luno exchange offer a gateway for new users across the continent.

According to the founder of UsefulTulips, Matt Ahlborg, Africa is well-positioned to become the “epicenter of utility Bitcoin usage globally” following the halving. He tweeted,

[5/5] Given all of these facts, Africa may have already taken over Latin America as the epicenter of utility Bitcoin usage globally. If you aren’t paying attention to this market, you are WRONG!