Last month, as a deadly new virus swept over the globe, one Canadian defense contractor predicted on an earnings call that it would lead to a big business opportunity in the U.S. Thanks to the White House, that bet paid off just a few weeks later in a $96 million no-bid deal.

In an unusual move, even in times of disaster, the White House stepped into the federal purchasing process, ordering the Federal Emergency Management Agency to award a contract to AirBoss of America. The Trump administration has rushed through hundreds of deals to address the pandemic without the usual oversight, more than $760 million reported as of this week, but the AirBoss transaction is the single largest no-bid purchase, a ProPublica analysis of federal purchasing data found.

While FEMA placed the order, it was directed to do so by the White House, ProPublica found.

It is unclear why the White House chose AirBoss for the protective equipment, which is similar to products made by other vendors.

“I can’t think of an example of the White House sending FEMA a directive to procure items from a particular company in a particular manner,” said Tim Manning, a former FEMA deputy administrator during the Obama administration.

The March 31 FEMA contract called for the company to produce 100,000 powered respirators and filters for medical workers treating patients in New York — a critical need that the Trump administration has been slow to address. The contract calls for them to be delivered to New York by July 31, five months after the state’s first reported case.

A little more than a week after a White House official publicly praised the deal, AirBoss’ stock price has more than doubled on the Toronto exchange.

A rubber manufacturer that sells to the auto industry and militaries, AirBoss targeted growth in U.S. federal contracts when it formed a new subsidiary, AirBoss Defense Group in Maryland, in January. The new entity absorbed AirBoss’ existing Maryland-based company, Immediate Response Technologies, that has contracted with the Pentagon for years. The FEMA contract was awarded to Immediate Response.

“Against a backdrop of a $750 billion budget request by the U.S. Department of Defense, significant global political instability and the specter of the emerging COVID-19 outbreak, we believe this business built around a strong survivability platform is well positioned to grow in the quarters and years ahead,” the parent company’s president, Chris Bitsakakis, told analysts in March.

For FEMA, the single deal makes up two-thirds of the $140 million the agency has spent on COVID-19 response through April 8, federal purchasing data shows.

In response to questions from ProPublica about the award, FEMA said the company “provided an unsolicited offer to the Government which was found to be acceptable.”

“The company’s proposal/offer was submitted by a White House task force assisting with sourcing of needed supplies and equipment,” the FEMA statement said. In the government database, a contract officer wrote that the procurement was “ordered by the White House.”

In an email, Gren Schoch, CEO of the AirBoss parent company, said the firm’s devices have been used “for many years protecting doctors from contagious or contaminated patients. The picture is pretty self explanatory.” He referred ProPublica to the White House for further information. The White House did not respond to questions.

The Trump White House’s involvement in purchasing supplies is highly unusual, because the task of figuring out the best suppliers is typically left to procurement professionals and acquisition lawyers who know the markets best, Manning said.

Vice President Mike Pence leads the official White House Coronavirus Task Force, which is made up of representatives from federal agencies and is overseeing the pandemic response. President Donald Trump’s son-in-law Jared Kushner, a White House official, has also established his own group working on the coronavirus response, which critics have dubbed a “shadow task force,” complaining that it adds another layer of confusion and bureaucracy to an already chaotic government effort.

FEMA did not respond to a question about which White House task force submitted AirBoss’ bid to the agency.

The federal government has published details of more than 2,000 orders worth nearly $2.5 billion to companies to address the pandemic. For instance, the Department of Veterans Affairs spent nearly $76,000 on a hand sanitizer order last month, while FEMA spent more than $322,000 on licenses for employees to use Zoom, the teleconferencing software that helps people work from home.

More than a quarter of the COVID-19 response contracts were signed without competitive bidding, ProPublica found. The Army, for instance, rushed through about $415 million to hire firms to transform buildings like the Aqueduct Race Track in Queens into makeshift hospitals. The VA spent more than $160 million, also eschewing any competitive bidding, for medical supplies, ICU beds and ventilators.

But the AirBoss deal was the first — and largest — where contract officers explicitly noted that the White House ordered the deal, ProPublica found. FEMA reported executing a second no-bid contract on the White House’s orders on Tuesday for N95 respirators, the commonly used masks that have become scarce. That deal, with Texas-based Prestige Ameritech, was worth about $9.5 million.

“ADG has stepped up with lightning speed, and their willingness to help meet the urgent need for powered respirators will save American lives,” Navarro said.

Typically, the White House has little involvement in procurement decisions, which are handled by individual agencies. But Kushner has taken a direct hand in coordinating emergency supplies, and Navarro was recently put in charge of the administration’s effort to corral American manufacturers in producing the products health care workers need most.

Ethics experts have criticized the White House’s effort as lacking transparency and opening the federal government to further influence from companies.

“Now we know we’ve got orders coming in through the White House, and there’s no way anybody can be assured that the government is obtaining the goods and services that best meet its needs,” said Virginia Canter, chief ethics counsel at the nonprofit watchdog group Citizens for Responsibility and Ethics in Washington. “Because it’s being done at the White House, we don’t know whether or not any of these individuals have financial interests that can be enhanced by directing this.”

At a White House press briefing last week, Kushner described a haphazard process that relies on Trump associates making personal appeals to the White House to get equipment. For instance, Trump told Kushner on April 2 that he had heard from friends in New York that the city’s public hospitals were running low on supplies. Kushner said he then called Dr. Mitchell Katz, who runs the city’s public hospitals, asked what was most urgently needed and arranged for a month’s worth of N95 masks to be sent.

Former FEMA officials said large sole-source contracts are often justified during emergencies because federal officials don’t have time to wade through multiple competing bids. The respirators in the AirBoss contract are made by a variety of manufacturers, but the ability to quickly deliver them may have been a factor. 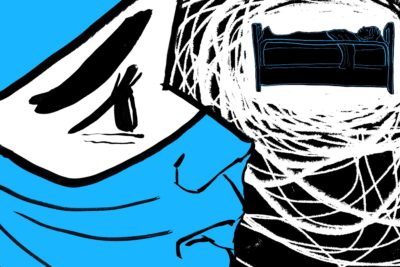 Low on essential supplies and fearing they’ll get sick, doctors and nurses told ProPublica in-person care for coronavirus patients has been scaled back. In some cases, it’s causing serious harm.

AirBoss did not make an executive available for a phone interview. Schoch, AirBoss of America’s CEO, didn’t provide specifics on how many of the powered air-purifying respirators, or PAPRs, have been delivered and to which hospitals. FEMA said that all the devices will be delivered within three months and that New York will determine how they are distributed.

But how and where the respirators are being distributed is unclear. Michael Lanza, a spokesman for the New York City Health Department, said the agency has not received any PAPRs from the federal government. The New York State Health Department did not respond to questions.

“We delivered everything we had in inventory and are currently ramping up production,” Schoch said. “The entire order is due in 13 weeks. In the past, most of this particular product has been sold directly to end users. We have been a supplier to the U.S. military for 20 years.”

On Wednesday, a congressional oversight committee released information showing the Trump administration has almost emptied the nation’s stockpile of personal protective equipment. But the administration had sent out just 100 PAPR devices overall as of April 6, to Washington state and Alaska, the data shows. 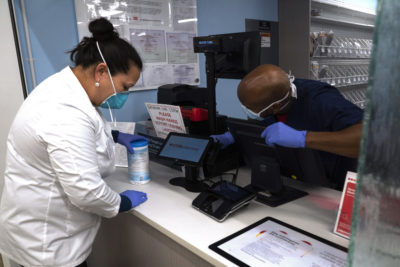 Pharmacy Workers Are Coming Down With COVID-19. But They Can’t Afford to Stop Working.

As prescriptions surge, Walgreens and CVS employees say they need more protective gear, cleaning supplies and sick pay. “Someone will come into work sick and there’s nothing anyone can do about it,” a pharmacist says.

The devices consist of a facepiece, breathing tube, battery-operated blower and filters. They are used in construction and health care settings to protect the wearers from fumes or infectious particles. The specific type of PAPR that FEMA purchased from AirBoss is certified by the Centers for Disease Control and Prevention. Jim Chang, director of safety and environmental health at the University of Maryland Medical Center, said the AirBoss devices appear to be “run-of-the-mill” PAPRs. Although the exact unit price AirBoss is charging the government is unknown, the total contract size and number of units suggest a maximum price of around $960 per device, which Chang said is within the normal range.

Research published in 2015 showed that PAPRs are often used as an alternative to N95 masks in health care settings, because they don’t require the same “fit testing” that the masks do.

A 2014 Pentagon memo outlining how to protect medical workers caring for Ebola virus patients included one of Immediate Response Technologies’ PAPR models on its list of recommended devices, in addition to versions made by 3M, Avon and MAXAIR.

Several companies that manufacture PAPRs, including 3M, did not respond to questions from ProPublica about whether they are fulfilling any federal orders for the devices. A Honeywell spokesman said the company does not comment on bids or contract pursuits. One company, Draeger, referred only to a prior announcement about an order of N95 masks, and said it was based on an official tender by the government.

Tell Us More About Coronavirus