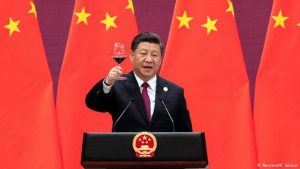 China has ramped up its efforts to initiate the Digital Currency launch and here’s what we know about it.

It allows from the conversion of Renminbi (RMB) to the Digital Currency with 1:1 ratio.  Matthew Graham, the CEO, Sino Global Capital tweeted that the App – DCEP is designed for ‘whitelisted’ users of the Agricultural Bank of China (ABC) from Shenzhen, Xiongan, Chengdu, and Suzhou. The mobile application apparently allows for establishing links to other digital wallets.

First glance of DC/EP
Can be send/receive when both party are offline pic.twitter.com/aQCdZQG5he

According to a report from SCMP, the online search for the word ‘virus’ and ‘cash’ are peaking in China. In an extreme case, a man from Jiangsu recently tried to “disinfect” cash in a microwave oven, burning the lot in the process. The Government has been pitching strongly against the spread via cash and has said that laser disinfection was being performed on the bills.

Currently, around 85-90% of the Chinese payments are made digitally via Alipay or WeChat pay. However, these are not interoperable currencies, the DC/EP version will enjoy FIAT status across the entire country. Molly, a Chinese blockchain researcher and writer for the Bitcoin Magazine noted in February,

DC/EP is fiat, it has “无限法偿性”, means you can’t refuse to accept DC/EP, now its quite normal that some merchants/platforms refuse to accept WeChat pay if they got Alipay or the opposite. And DC/EP transactions can be done when both sender and receiver are offline

She also noted that in the past, the SARS epidemic in China provided the boost for digital payments as people resisted cash in the country. Hence, the adoption of bank cards and eventually payments caught on.

The Blockchain Service Network (BSN), a blockchain platform built under the collaboration of national agencies in China will enter the global commercial stage on Wednesday and globally on April 25. The integration between the digital currency and BSN will allow a platform for open source development for blockchain-based applications.

It’s basically a centrally controlled crypto, with an end goal of having a suite of applications like Ethereum and also giving China complete visibility of all transactions.

The whitepaper of the BSN network plans to extend support for permission and public blockchain networks like Hyperledger Fabric, Ethereum, EOS and Baidu based XuperChain. It presents a cost-efficient way for developers to build financial and other blockchain-based applications on the network.

Do you think that this will be positive for the crypto-markets or centrally controlled projects will eliminate existing projects? Please share your views with us.