This story was co-published with the Atlantic and is not subject to our Creative Commons license.

In 2008, the first of the once-in-a-lifetime economic calamities of most of our lifetimes engulfed the country and the world. Now, just over a decade later, we get to experience the second.

How well the country responded to the 2008 global financial crisis is still subject to debate. After the crisis peaked in September 2008 and the government intervened with various bailout programs, the financial system and corporate America stabilized. Corporate profits were rising again by the second half of 2009.

Almost everything else is in dispute. Did the efforts to save the economy do enough to help average Americans? The global financial crisis of 2008 threw millions out of their home and jobs. The Obama administration designed programs to help people to stay in their home, but they were spectacular disappointments. The median household income stayed below where it was in 2007 (and in 2000) until 2016.

But at least the Great Recession taught the country two broad-brush lessons: Bailouts should help working Americans, and the financial system should be made more resilient to shocks.

Or so we thought. Still in the early stages of the pandemic economic fallout, we are already replicating many of the same mistakes from 2008.

True, the two crises have striking differences. The previous global panic arose thanks to the financial system’s lending recklessness and, in some cases, deception and fraud. Here, something akin to a natural disaster has swallowed lives and the economy with it.

But the rescue and recovery imperatives are the same. As the government rushes to aid the economy, how that’s done, who benefits and who is left behind matter. So far, the signs are ominous.

The “bailout is going to repeat a lot of mistakes of the 2008 interventions,” said Amanda Fischer, the policy director for the Washington Center for Equitable Growth, a left-leaning economic think tank. After those rescue efforts, “Corporate America’s profits bounced back quickly, but most working people have not seen their conditions improve.”

Just as the two crises are not the same, neither are the rescues. This time around, help for working Americans is more of a priority. The marquee provision of the multitrillion-dollar CARES Act, passed by Congress late last month, is the expansion of unemployment insurance and direct payments to citizens. If those go out quickly (and there are already concerns about that), that will be helpful.

But the package also bolsters corporations, mainly through $500 billion from taxpayers. In the 2008 version of this aid, the Troubled Asset Relief Program, banks were asked politely to expand lending with their taxpayer largesse. They did not — and the same thing could happen again.

Restrictions attached to the money going to small- and medium-size businesses are spelled out clearly. Funds should be used to help companies retain more of their workforce. Companies cannot pay out dividends or buy back stock. Companies must honor collective-bargaining agreements and stay neutral during union drives. They can’t outsource or ship jobs offshore.

But the enforcement mechanism is weak. The Treasury secretary “shall endeavor” to implement these aspects of the program, the law says. The companies need to produce a “good faith certification” that they have adhered to these conditions.

The real problems lie with the aid to large corporations. Most of the $454 billion earmarked for this program will go to them (another portion of loans and grants are earmarked for airlines and Boeing). Though the law contains some language for these giant corporations to prevent buybacks, preclude dividends and set limits on executive compensation, no employee protections are spelled out. And the executive compensation limits are set at last year’s levels — not exactly the stuff of great sacrifice during a spectacular economic cratering.

For every condition, there’s a loophole. The Treasury secretary can waive any of the Big Business conditions if, as the law states, it is necessary to “protect the interests of the federal government.” What that means will be up to Steve Mnuchin, a reliable friend of Wall Street and Big Business. (The Treasury Department did not respond to a request seeking comment.)

What’s more, the key aspect of the lending program is that the Federal Reserve will lend to corporations to borrow on top of the government’s contribution, up to 10 times. Anything from the Fed that isn’t a “direct loan” to a company is not subject to the restrictions attached to the Treasury money.

In addition to the squishy language that gives flexibility to Mnuchin, the oversight lacks teeth. The law does set up a congressional oversight panel to monitor the program, but this provision, too, replicates a problem with the 2008 bailout. Last time around, Congress created the Congressional Oversight Panel, but it didn’t have much in the way of power beyond that of the bully pulpit. Elizabeth Warren, then a private citizen who served as the chair, turned that into a powerful cudgel to point out the lack of banker accountability and the failure to help homeowners. But the panel’s work did not substantially affect the course of the bailout or correct its flaws.

Here again, the new body, the Congressional Oversight Commission, has few weapons. It does not have subpoena power, it has no independent enforcement authority, and it cannot police compliance with the worker-aid conditions of the law. As in 2008, there’s an oversight board and a special inspector general. But last time, Neil Barofsky, a gritty and independent former prosecutor had that special appointment; this time, a loyal White House soldier is in line for the pandemic IG job.

Another hallmark of the 2008 bailout was needlessly complex programs with the wrong incentive structures. As ProPublica chronicled in story after story, the government programs to help people get mortgage relief were plagued by ongoing chaos, lax enforcement and outright failure. The biggest banks could not handle the demand and did not have the proper financial incentives to actually give people loan relief.

We are seeing early signs that the small-business program, called the Paycheck Protection Program, administered through the Small Business Administration, may suffer similar problems. It’s a complex program offered through banks. One concern is that banks stand to make billions in fees (on top of the interest), money that could be used to help businesses. What’s more, the banks may struggle to dispense loans quickly and efficiently. 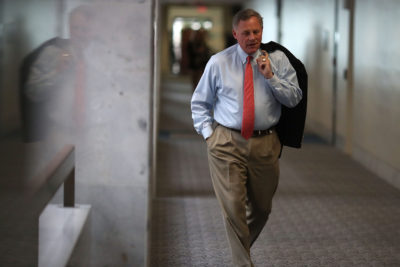 The newly identified trades come as Sen. Richard Burr is under federal investigation for selling stocks ahead of the coronavirus stock market crash.

In addition to repeating failures in how we send out the lifeboats and to whom, we also failed during the calm before the inevitable storm. After the financial crisis, the government started conducting the annual “stress tests” of the largest financial institutions, subjecting them to pretend crashes to gauge whether they could withstand crises. But it’s turning out that the stress tests were inadequate. They did not predict anything close to what’s happening now.

Take just one portion of the stress tests. The “severely adverse scenario” for the Fed’s 2020 stress tests had unemployment rising from 3.5%, where it was in early 2020, to a peak of 10% a year and a half later. Now that rise is going to happen in a matter of weeks — and will probably be much more dire.

Sure, almost no one predicted a cataclysm happening this deep, this fast. Stephen Cecchetti, a former banking regulator who is now an economist at Brandeis University, recalled working with a risk-officer colleague who had taken on the role of thinking about all the bad things that could happen to the financial system. “He was very good at this nightmare business, and even he would not have had this nightmare,” he said. The scenarios he envisioned weren’t anywhere near pessimistic enough, according to Cecchetti.

The Fed suffered a similar failure of imagination. Its stress tests were similar every year. Unemployment went up, but over several quarters. Economic growth went down but then went up. Some regulators called for testing a much wider range of scenarios. Pandemics are not unknown. Nor is war. How about crippling cyberattacks or assaults on the electrical grid that shut down growth for a month? The Fed doesn’t subject banks to any of those scenarios. Nor does the central bank test against more modest, but still unusual, recessions, such as one where growth and unemployment drop but then do not rebound for a long time. “We are very, very ready for a standard deep recession,” said a person who helped design the stress tests and who had urged his colleagues to be more imaginative. (This person and sources quoted below were granted anonymity because they were not authorized to speak on the record.) “We are not ready for much of anything else.”

Now “anything else” is upon us. And just as in the acute phase of the 2008 crisis, the government doesn’t understand the urgency of making the banking system stronger. The U.S. government has not mandated a suspension of dividends, stock buybacks or bonuses for all financial institutions, despite former Federal Reserve officials’ calling for such a move. Europe is already implementing a variety of these measures. Making banks keep capital right now is smart because a true financial crisis, if not upon us right now, is likely to come, especially the longer the economic downturn lasts.

Trump Congratulates Businesses for Helping Fight Coronavirus. But His Own Company Has Been Absent.

We checked in on the Trump Organization’s properties and couldn’t find any sign they were joining the effort to fight the coronavirus, even as the president urges other companies to do so.

In still another echo of 2008, regulators spent the period before this crisis easing up on the reforms implemented after the last crisis. Led by Randal Quarles, a Trump appointee on the Federal Reserve Board, regulators loosened numerous bank rules in the past couple of years. They also allowed banks and financial players to load up vulnerable companies with risky debt. (In recent weeks, amid capital-market wobbles, bank regulators have eased a variety of regulations even more.)

Relaxing financial regulations in the past few years did not cause this economic crisis. And so far, large American banks are not suffering nearly as badly as they did in 2008. But these rollbacks could make the system more vulnerable in the coming months than it should be.

Trump regulators “seemed to have an almost willful ignorance about the causes of the last crisis that will make the situation we are in that much more precarious,” said one person involved in the reform efforts and who fought the rollbacks. “The crisis in the markets is just beginning and [the easing of the regulations] will exacerbate the economic pain we are feeling as a result of the coronavirus.”

The design of the rescue package has left those who watched and studied 2008 deeply frustrated. “I do not have a good explanation of how we continue to fumble this. I was thinking when this started, ‘At least we have 2008 to guide us to not make the same mistakes,’” said a Hill staffer who worked on the CARES Act and also worked on the 2008 bailout. “This will paper over bank balance-sheet problems, help tech valuations and boost leveraged loans. In three months, I think the stock market will look good. But the vast majority of workers will be worse off. The law will amplify inequality and the power of large corporations over labor and the workforce, and they won’t be able to recover for a generation.”

Perhaps we’ll learn the lessons in time for our third once-in-a-lifetime crisis.

Do you have access to information about the bailout efforts that should be public? Email [email protected]. Here’s how to send tips and documents to ProPublica securely.