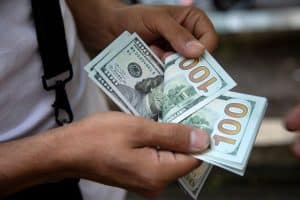 The World’s financial systems are being braced, are fragile, and will fail according to ardent crypto supporters.

Despite this, one trader, who is bullish on the technology, believes that this is not the time for Bitcoin (BTC).

In his view, people want to hold cash and not a “speculative asset they don’t understand”.

It is Cash, not Bitcoin

The observer, as pragmatic and realistic as he was, argues that the drastic and punitive measures that governments only feeds a rush towards safety and that asset right now is hard-cold cash.

Cash is king during crises and the USD has outperformed other safe havens, including Bitcoin and gold.

“In times of uncertainty, people want cash, not speculative assets which they don’t understand. I share the same beliefs as you, but now isn’t Bitcoin’s time. We have a higher chance of going down with a better R: R than going up IMO.”

He was responding to Satoshi Flipper’s comment that the world is monitoring Bitcoin and how its “role in all this as clarity around CV and the global recession increases.”

“When the financial systems become paralyzed and it will, Bitcoin will become the global currency. Initial reaction was to dump BTC, but we’re past this. The world is monitoring BTC’s future role in all this as clarity around CV and the global recession increases.”

Specifically, the USD was a preferred tool when traders and investors in the first half of March 2020 liquidated their holdings as the US stock market crumbled.

This, ironically, was at the back of the FED intervening, slashing rates to record lows to stem the cascading effects of COVID-19. The disease has now claimed thousands of lives as the stock and crypto markets crash.

People have an alternative in Bitcoin

Still, this crisis differs from the Great Financial Crisis or the Dot-com bubble. This time faced with debasement and panic, the end user can have a shield in Bitcoin and crypto.

The network is self-regulating and an alternative for the savvy. A view that has the support of Nischal Shetty, the founder and CEO of WazirX:

“Whether Bitcoin will emerge as a better alternative to other assets during global financial meltdown, only time will tell. However, compared to the previous crisis, everyone globally now has an alternative choice!”

Whether #Bitcoin will emerge as a better alternative to other assets during global financial meltdown, only time will tell.

However, compared to previous crisis, everyone globally now has an alternative choice!