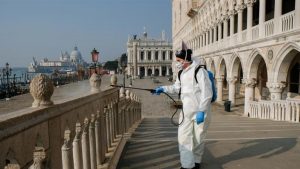 The world seems to be its’ losing it’s order as the deadly Coronavirus continues it’s exponential spread. The number of cases in China seems have reduced drastically with only 13 new cases reported yesterday. Moreover, South Korea seems to have done a remarkable job by adopting wide-scale testing across the country.

However, the total number of cases in Italy have surpassed 30,000 with a morality rate of 7.9%, the mortality rate in China was around 4%. It has already surpassed 2,500 deaths behind China’s 3237 casualties. China was quick in developing diagnostic and treatment facilities which helped in speedy recovery.

Moreover, apart from Italy, Spain, France and Germany too are under severe clutches of the virus. While the European countries are looking at severe lock-downs, quarantine and health crises, even the US has reached the tipping point.

Reportedly, the United States is reaching threshold levels of a social outbreak stage from the inter-personal one’s. The discrepancy in the number of tests conducted suggests that the situation might be way worse.

Crypto Analyst, Dovey Wan, who drew comparison from the nature of growth in Italy and the US, tweeted,

The numbers are frightening, reportedly the US now reports 6,500 confirmed cases, rising by 1,800 yesterday alone. Hence, even by Dovey’s report, as of today, US is on path on the number of confirmed cases above 5883.

Earlier, Balaji S. Srinivasan, Angel Investor and Economist had predicted the out-break in the US far before the Government started taking precautions.

Currently, if the S&P 500 index is to taken as an indicator of sentiments, the traders seems to be in a lot of fear. Despite extreme monetary relief measures from the Government, the futures price barely budged. This is following the drop after the reduction in interest rates to zero.

While the stock markets were protected by circuit breakers, fail safes and QE measures from the Government, Bitcoin’s free market is looking to hold above $4,500.

These are testing times of Bitcoin, the price showed signs of decoupling with the SPX index yesterday, breaking bullish. However, it failed to break-above the range high around $5600 which stays as resistance.

I would like to point out that, the leaders in the  crypto-space have been far early in predicting the crisis. While this is no reason to panic, we should all be aware and take the required measures.