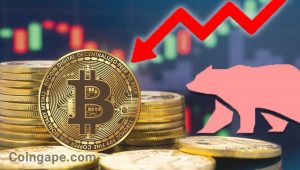 The cryptocurrency field is slowly trying to rebuild after a market carnage witnessed the top altcoins lose 40-60% of their value on Mar. 12, leading to the now infamous “Black Thursday” comments. Bitcoin in particular has faced one of its toughest weeks plummeting from near $9,000 USD highs to below $3,600 USD in hours. The vast volatility across BTC market in the past seven day period looks set to continue as the implied and realized volatility charts skyrocket to record highs.

Realized volatility measures the overall change in returns of an asset in a period of time signaling the possible movements in price in future. The monthly realized volatility of BTC spiked to 187% on Mar. 15 as the top crypto fell below the $4,500 USD mark, setting a two year high – and higher than during the 2017 bubble.

The top cryptocurrency is currently on a 35% slide from opening year prices at $7,100 USD, representing a 55% dip from 2020 highs. Such wild price movements on BTC’s price has set the realized volatility to highs last experienced in a sub-$1000 USD BTC market. The ten day volatility is the highest recorded, at 315%, since 2017 when the 10-day realized volatility hit 200%.

What does this mean for Bitcoin‘s price?

Well, increased volatility signals a possible gigantic move for BTC. With the realized volatility charts surpassing the implied volatility chart, BTC looks set for a continuation of the volatile run. However, as seen through the global macroeconomic view, BTC looks to test even lower levels despite the 55% drop from YTD ATH.

When you want liquidity you want stability. BTC volatility makes it unstable and unwanted. In theory it makes more sense than in practice.

However, Antony Pompiano, one of BTC’s biggest advocates, believes the near term volatility effects on Bitcoin will soon be washed away due to the increasing stimulus by the Federal Reserve on the U.S market. He replied to Josh saying,

“This is true in short term during the liquidity crisis, but the monetary stimulus response will be very bullish for Bitcoin. Gold essentially went through same sequence in 2008-2011.”