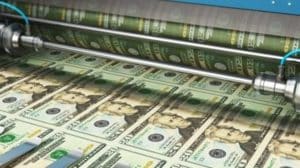 The U.S. Fed Chairman, Jerome Powell announces that it is preparing to buy unlimited amounts of U.S. bonds and mortgage-backed securities to prevent the economy from falling into depression. Hence, paving way for another $2 trillion worth economic stimuli.

With the employment rates heading towards 30% mark and the world experiencing a lock-down due to the Coronavirus, the stimulus is backed by bleak prospects of revenue. Moreover, while the stimulus might seem necessary at the moment, it is also increasing hyper-inflationary risks.

The current move by the US Feds is an illustration of the Modern Monetary Theory (MMT) which allows the countries like U.S., U.K., and Japan to print indefinite amounts of money without worrying about debt and inflation.

Alex Kruger, a crypto analyst who spoke on the issue notes that, it considerably increases the inflationary risk. He added,

This is how free money looks like. But there is no such a thing as a free lunch, is there.

Society pays for this. Via inflation. The price to pay is inflation in the long run. Inflation expectations are popping and the long end of the treasuries curve is already pricing it in.

The visionaries in the crypto-space believe in a shift of a paradigm from the current economic system based on credit and USD as the global reserve currency. Bitcoin fits all the characteristics required for replacement.

Moreover, this is necessarily causing debasement of the major reserve currencies across the entire world as the US, UK and other European Central Banks have all set their money printing presses to infinity. According to Ryan Selkis, the founder of Messari ‘no currency has ever survived inflation.’ He tweeted,

Given there has never been a fiat currency that has survived debasement, the future value of bitcoin isn’t measured in the thousands or millions.

Technically, its $$$ upside is infinite.

A $250,000 bitcoin would mean the dollar lost reserve status and is hyperinflating.

Previously, in 1920 Germany experimented with a similar economic model. However, ended up collapsing with a $4.2 trillion debt and a shift to the gold standards.

Breaking: The US Federal Reserve along with all the world’s government’s and banks have found a cure for #coronavirus pic.twitter.com/Wewrem0J0i

Currently, the futures index for the SPX is at $2320. Hence equity can expect to rise as well.

On the other hand, Bitcoin is currently looking at a bullish reversal as it closes at a 11.7% higher on a daily scale. The price of Bitcoin at [BTC] at 3: 30 hours UTC on 24th March 2020 is $6590. It is showing signs of decoupling with the stock markets to trade as a risk asset.

Do you think that the Feds will be able to stabilize in the aftermath of the crisis? Please share your views with us.