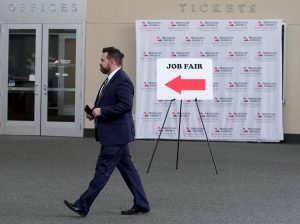 Week-to-date, Bitcoin is up double-digits.

After a cataclysmic and depressing fall, BTC price is up 68% in the last trading week and looking likely to breach $7,000 amid high trading volumes.

However, with the negative impact of coronavirus–which from general observation, is resistant to massive quantitative easing efforts from Europe, the UK, and the United States, Bitcoin could add to their gains if the number of unemployment claims from Ohio is leading.

There, reports reveal, the number of claims in the last week reached 160,000, an anomaly, as workers are encouraged to work from home to prevent another wave of contagion. Some have even lost their jobs.

According to Antony Pompliano, the Co-founder & Partner at Morgan Creek Digital, the situation “could get really bad very quickly” and is instead asking the community to act with kindness.

“Ohio’s unemployment claims are almost 140,000 from last Sunday till yesterday. 140,000 in 5 days. From one state. This could get really bad very quickly.”

Ohio’s unemployment claims are almost 140,000 from last Sunday till yesterday.

This could get really bad very quickly.

Please be kind to folks. Try to help those in need. There are a lot of people hurting right now 🙏🏽

Above Average NFP Data in February 2020

Employment in the US under President Trump is at an all-time high and peaking.

The latest Non-Farm Payrolls (NFP), a tracker for non-farm employment levels on a monthly basis, for instance, exceeded expectations in February.

The performance was despite the effects of coronavirus in China and Europe and an announcement by the Federal Reserve that it will slash rates and intervene in the Repo market for liquidity. The above-average performance saw USD rally and crash the market.

However, as it is, the situation could quickly change. If unemployment rises amid billions of dollars injected into the market, Bitcoin and gold, two of the leading safe haven assets, stand to benefit.

Inflation will be factored and a re-pricing considering a grim reality of low purchasing power and governments scrambling to contain a hampering virus, there seems to be more headroom for Bitcoin in days ahead.

The steepening of the Treasury curve shows how the market is pricing in an increase in bond supply and inflation down the road. Once the maelstrom is behind us, this should be good for gold, and, theoretically, for bitcoin as well. In the mid to long run. pic.twitter.com/1qvTmLlcYO

Traders are also looking at the emissions shock of May 2020 when rewards will be slashed by half.

Such an event is the added fuel for better BTC prices going into the second half of the year when the asset often outperforms.