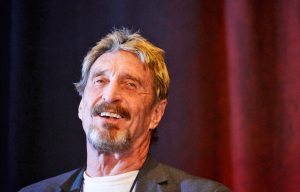 Crypto scams have become a common phenomenon on Twitter. High profile individuals now have to remind their followers not to send any crypto to accounts purporting to be them. Jack Dorsey, who is a crypto fan has been aware of this but doesn’t seem to have a curb on it. Now, one of the most targeted people, John McAfee, has ousted Jack Dorsey saying he (McAfee) can sort the problem in 24 hours.

Complaints Have Fallen On Deaf Ears

McAfee’s remarks follow Elon Musk’s raised concerns about impersonation and cryptocurrency scams on Twitter. The Tesla CEO said he has been a victim over the last few years of impersonation where his followers have been asked to send cryptocurrencies. This they have done by promising giveaways right after receiving crypto from users.

“The crypto scam level on Twitter is reaching new levels. This is not cool,”

In 2018, when scamming was at its highest, an analysis by the Independent news outlet, found out that over 400 people had sent crypto to scammers.

Troll/ bot networks on Twitter are a dire problem for adversely affecting public discourse and ripping people off.”

John McAffee now says he can put this to an end with Dorsey’s team while vaguely suggesting that Jack has been allowing this to happen. One of the key ways that seem to have allowed this to go on, is the fact that scammers can buy verified accounts and rename them.

Musk takes Twitter to task over fake accounts impersonating him.

I am far more impersonated than Musk.

All of my complaints have fallen on deaf ears.

If I ran Twitter’s development team, this problem would be solved in 24 hours.

Want to try me @Jack ?https://t.co/wsRYLSikI1

Another who has been a victim of impersonation is Vitalik Buterin who for a long time had to go by the name Vitalik Buterin nongiver of ETH. This initiative showed that there is a personal responsibility for the high profile individuals to ensure their followers are not scammed.

For Jack Dorsey, maybe its time he accepted help. If John McAffe knows how to catch the scammers and ensure that this comes to an end, then he should. But let’s not forget this is the same man who predicted BTC as the future and how it would reach $1M in 2020 to only go back and say it was a stunt to get people buying.

Crypto scams paint a bad picture over the whole industry especially when mainstream media covers it. This pushes potential investors away and fosters an unhealthy market.

The post John Mcafee Says He Can Sort Out “Dire Problem” of Crypto Scams on Twitter in 24 Hours appeared first on Coingape.