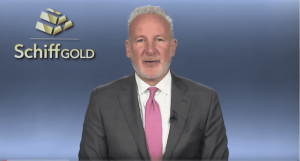 Peter Schiff, the CEO and chief global strategist of Euro Pacific Capital ups the ante on his criticism of CNBC for dismissing gold, and promoting Bitcoin. Moreover, he also suggests that we’re in the age of a financial bubble of abnormal gains.

It happened after a media report that seems to dismiss Gold as an investment due to perceptibly less gains than other assets.

A CNBC anchor responded to Citi’s call that #gold will hit 2K in the next 12-24 months by dismiss the potential as being too low a return to matter. That’s a 25% gain in less than 2 years! In contrast a 2-year Treasury yields just 1.4%, and the S&P yields 1.7%. New low for CNBC!

Moreover, the gains from Q3 2019 has now driven the stock market to All-Time High (ATH). Hence, the gains are well above average at the moment.

Furthermore, between Gold and Bitcoin, the increase in Bitcoin has been way higher than gold. Nevertheless, the volatility

Decade and Yearly Increase in the Two

Whereas, the gains in Bitcoin have been astronomical since it’s inception in late 2008. While the decade rise in BTC has been beyond imagination around 9500% (beginning with price at $1/BTC), the yearly gains in Bitcoin is at 46%, currently. The increase in Bitcoin is nearly 6 times in 2020 alone.

Moreover, the increase in S&P 500 since 2010 has been around over 211%. Schiff argues that we’re in a massive financial bubble. One which is driven by historically low interest rates and huge supply of FIAT currency.

The argument around bubble characteristics has a lot of weight around it due to increasing debt. However, the Governments are currently undergoing massive deleverage in the aftermath of 2008. And, the forces of capitalism continue to dominate global economy.

Which asset do you think will lead in the current decade? Please share your views with us.