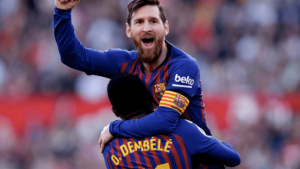 Barcelona FC, arguably the biggest club in the world is adopting digital currencies. The club has just announced a partnership deal with blockchain platform Chiliz to offer fans ‘Barça Fan Tokens’. This will help fans better interact with the club by engaging in polls, receive unique gifts from the club and buy club merchants.

Sports tokens have been a growing trend around Europe. Notable clubs such as Juventus and As Roma are already in on it. It has become a new interactive way for clubs to engage with their fans. Leading the revolution is blockchain platform Chiliz which has now signed a partnership deal with Barcelona.

The Barca Fan Tokens announced today will give fans the right to engage in polls, vote on different topics and get rewarded for climbing up the leaderboard with unique gifts. According to the official announcement, the Barca Fan Tokens, $BAR, will be available in Q2 2020. There will be 40 million Barça Fan Token available and will cost €2 at the initial point of sale.

For the fans, this is a new way to interact with the club and be part of the team. Josep Pont, a member of the Barcelona Board and head of Commercial, noted this about the deal:

“We are proud to welcome Socios.com to the Barça family as a new global partner. This agreement will give us the chance to set up innovative marketing and partnership activations with a clear focus on the digital realm to take the Club closer to our fans around the world.”

For Barcelona fans, this is a big win. Their connection to the club will be stronger with the Barca Fan Tokens. And for the crypto world, it’s all about adoption.

Barcelona has more than 32 million followers on Twitter. Across all its digital platforms, it has over 148 million fans. So, when the club starts talking about cryptocurrencies this means exposure and growing adoption.

Binance CEO, Zhao has been pointing this out in his latest Tweet.

We have in the last few years seen a few notable clubs get in on club tokens but none has been as big as Barcelona. The Spanish club is set to establish a trend in the sports world. In the months to come, and based on the success of this deal, we are set to see more clubs take up the same approach.