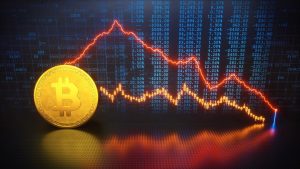 Bitcoin was violently rejected today at the $9,600 position. This as bulls looked to break this long term resistance and continue for a second week running their incredible market dominance. The rejection means a Bitcoin price pullback in the short term. But one that the bulls will need to be wary of as a top analyst has been a warning.

Long Squeeze To The Downside

Jacob Canfield, a top Bitcoin analyst and guest trader on Forbes and CNBC has warned that investors could see a pretty big long squeeze to the downside. This he explains comes following prolonged positive funding. This in layman terms means that Bitcoin could be overbought. At its current position, key supports have to hold following rejection above $9,500 or risk spiraling downwards.

#Bitcoin is looking a bit scary for the bulls at the moment.

The prolonged positive funding could be setting up for a pretty big long squeeze to the downside.

If support breaks, it will most likely be a violent squeeze as longs cover their positions

One Twitter user who was keen to respond to Canfield suggested that the prolonged positive funding could be in anticipation of the halving.

The eagerly awaited halving is expected in about three months and in anticipation, investors will stack up. This is true and is expected to ensure that Bitcoin has solid support given demand will remain high. However, this might not protect it in the short term but rather in the midterm and longterm.

It is also important to note that during the day, Bitcoin whales have been busy. Whale Alert, a Twitter account that tracks big transactions on crypto exchanges has today identified a couple of big transactions. This suggests that something is about to happen to prices, either up or down.

Since BTC was rejected at $9,600, the digital asset has been going downwards. It has lost over 1.5% from the same time yesterday and dropped to the $9,200 price range. Are the bulls scared? The bulls will look to protect Bitcoin from falling below its high support of $9,200. if this support is breached, Bitcoin price risks falling below $9K.