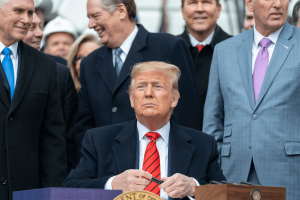 US President Donald Trump has been acquitted by GOP Senators.

The decision to “free” the president from the accusation of abuse of power seems to be a breath of fresh air for the capital market and Bitcoin, which at the time of press, is stable and treading above the psychological $9,500.

Although this was largely expected, the confirmation by the Senate now allows the president to go on with his duties unabated. It is a move that has also been celebrated by the Vice President, Mike Pence, whom during the Women for Trump event in Pennsylvania said attempts to impeach Trump was a based on a “sham investigation” and that the decision sums up what is turning out to be an “incredible” week.

“Just a little while ago the United States Senate voted to acquit President Donald Trump on both articles of impeachment. After months of a sham investigation and a partisan investigation, it’s over America.”

Meanwhile, House Speaker Pelosi said lawlessness had won, orchestrated by Sen. Mitch McConnell whom she said was a “rogue leader in the Senate who would cowardly abandon his duty to uphold the Constitution”, CNN reports.

In a statement, she said:

“President Trump was impeached with the support of a majority of the American people – a first in our nation’s history. And now he is the first President in history to face a bipartisan vote to convict him in the Senate.”

“A full 75% of Americans and many members of the GOP Senate believe the President’s behavior is wrong. But the Senate chose instead to ignore the facts, the will of the American people and their duty to the Constitution.”

Bitcoin as a Safe Haven

It is a well-established idea that Bitcoin, a new-age safe haven, flourish during times of political uncertainty and constitutional crises.

Yesterday, as votes poured in, Bitcoin temporarily soared to over $9,700 before pulling back to spot levels.

If Trump would have been impeached, it is likely that the asset’s price would have soared as smart money shifts their capital to an independent asset controlled purely by mathematics and immune to politics.

The post Bitcoin [BTC] Firm and on a Solid Uptrend as President Trump is Acquitted appeared first on Coingape.