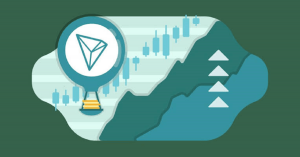 Tron, the smart contracting platform that competes with Ethereum and EOS and ranked highly by the China’s Center for Information and Industry Development (CCID), has climbed up the public addresses rankings only trailing Bitcoin and its competitor, Ethereum.

Tron is the third most active after Bitcoin and Ethereum

As most crypto enthusiasts focus on this mini bull-run (caused by a strange hopium mixed fear about a notorious fraudster), #TRON rises to 3rd Most Active Addresses among all blockchains:#Bitcoin: 640k (300k txs)#ETH: 281k (549k tx)#TRX: 233k (1M txs)

5% of all Tron Addresses are Active

According to data from Tron Scan, the network’s explorer, there are over 4.4 addresses moving over 896k transactions in the last day alone. Also, the network has 972 online nodes with a throughput of 6 TPS. From this, simple math reveals that although Tron prides of millions of addresses but only 5% are active.

By Jan 15, 2020, additional data from CoinMetrics also reveals that the number of Bitcoin addresses is 10X more than Tron’s at 759k and 70k, respectively.

This disparity is a clear indication that the network is underused even when Tron has a higher throughput, adopting a delegated Proof of Stake (dPoS) consensus system that introduces 27 Super Representatives.

An earlier Twitter post from Tron Scan said the 4 million address milestone points to an ecosystem that is rapidly developing.

1⃣According to #TRONSCAN, TRON total accounts have reached 4,015,527
2⃣TRON ecosystem has developed rapidly and continues to make efforts to decentralize the web.

A parallel finding by DappRadar, a dapp analytics firm, further concludes that Tron is almost purely a gambling platform.

“TRON is a blockchain that’s almost purely for gambling. And it supports this category very well, both in terms of high daily usage and generated value.”

Moreover, while developers can launch on the platform, it’s a tall order to sustain audience:

“This isn’t to say developers haven’t attempted to launch other types of dapps on TRON. A decent number of games have been released but, as with dapps in other categories, it appears to be easy to launch well on TRON, but very hard to sustain an audience.”

Misha Lederman also dismissed the current Bitcoin (BTC) revival terming it as a blend of hopium and fear about a “notorious fraudster.” Sentiment around digital assets has improved in recent times.

As evidence reveals, Bitcoin’s dominance felled from 68% to 66% at the time of writing hinting of investors re-balancing.

A section of them might have shifted their funds to altcoins in anticipation of the so-called “altcoin season” that could directly benefit TRX, the native currency of Tron.

I try to set the targets step by step. But altcoin season is starting. If you ask me the price target in the end of altcoin season and then BTC rally, it is way above 80 usd. It will happen till end of April i think.

The post Tron [TRX] Addresses are the 3rd Most Active after Bitcoin and Ethereum appeared first on Coingape.