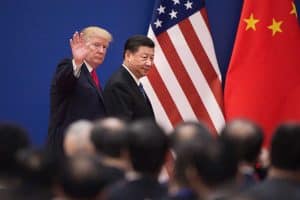 The rising tension between US and Iran in the beginning of 2020 caused an uptrend in Bitcoin [BTC] and gold. However, Gold suffered it’s first blow as American leaders called off the potential war with Iran as the price dipped below $1550.

Now, an economic trade deal with China further strengthens investor confidence to take risk on stocks. Gold price drops back to the levels before the US air-strike. At press time, an ounce of Gold is trading at $1538.

The phase of the trade deal is due Wednesday 14th January and it looks like that the markets have already set the momentum for it.

The two countries will agree to a series of commitments like reducing tariffs and removing certain restrictions to grow business between the leading economies.

All is Not Fine with the Economy

Nevertheless, the effects of the trade deal will not have any significant effect on the economy at large.

The rising national debt of the US and other worrying signals poses a big threat to the global economy. Gold buff and crypto critic, Peter Schiff tweeted this morning,

The actual national debt grew by over $1.2 trillion in 2019. That’s just over $100 billion per month. The rise in 2020 will be even greater. If we really had a good economy, the deficits would be getting smaller, not larger.

Moreover, financial and crypto analyst, Mati Greenspan, points out that the mortgage defaults which caused the downfall of the economy in 2007 is back above ATH levels as well. He tweeted,

This along with the rising national debt is an alarming signal that was tripped last year. Nevertheless, the quantitative easing and positive political developments with China has kept the adversity at bay. The stocks soared to new highs on Monday ahead of the trade deal. The S&P 500 index is at $3288 at press time.

Furthermore, the correlation of Bitcoin with gold and events affecting global economy points to a downtrend. However, other fundamentals like Halving along with positive technical analysis seems to be pushing the price up.

Do you think the trade deal would affect the price of Bitcoin? Please share your views with us.

The post Gold Falls ahead of US-China Trade Deal – Will ‘Risk-on’ Drop Bitcoin as well? appeared first on Coingape.