Chinese banks on digital currency path have started to conduct research and development processes for the development of the China Bank Digital Currency (CBDC) or Digital Yuan.

The digital Yuan has been subject to global news since the People’s Bank of China announced creating a digital currency said to be a rival to Facebook’s Libra currency. China is reportedly trying to oust the US dollar from its global domination with the launch of the Digital Yuan.

The Digital Yuan being subjected to research is still being developed by the People’s Bank of China. There has not been any official statement about the launch date of the currency but the Central Bank announced it is making steady progress.

Alongside this, the country has started implementing a law governing cryptographic password.

The law passed since October 2019, meant to enable the development of the cryptography business and to ensure the security of cyberspace and information, was slated to be implemented on Jan 1. 2020.

The currency was to be launched last 2019 but major Chinese banks on digital currency announced they would conduct further research to develop the sovereign electronic currency this year.

China has devoted around five years to research and develop systems for its Digital Yuan. The country’s Central Bank also launched its pilot project for the currency in December 2019.

Similar to its legal tender, the CBDC is going to be controlled entirely by the People’s Bank of China. This is unlike private and decentralized cryptos which are not controlled by a single entity.

The currency is not for speculation. It is different from bitcoin or stable tokens, which can be used for speculation or require the support of a basket of currencies.

For those who missed the memo, Chinese financial news outlet Caijing reported last December that the nation’s Central Bank will soon test CBDC in the cities of Shenzhen and Suzhou, the first being China’s iteration of Silicon Valley.

There will be a first phase, which will is slated to begin in the coming weeks, and a second, during which the Chinese banks on digital currency will be widely promoted in the two cities sometime in 2020.

There is the secrecy surrounding the date of launch but when it does, China might begin limited tests of the digital Yuan, perhaps with corporate partners. As the country makes its push against the dollar and with possible US sanctions, this centrally-planned effort “could shift the balance of financial power” according to one observer. Why not indeed?

There were speculations that China could use its digital yuan to increase surveillance on its citizens, but the research institute’s top official assured privacy for transactions while still being able to trace what it suspects to be illegal activity.

Just a few days ago, the onshore Chinese #yuan against the #US dollar rose above 6.95, the highest growth since August last year. It’s interesting to wait for the digital Yuan and how brisk it will rise against the dollar. Again, a lot will depend on Chinese banks on digital currency support. 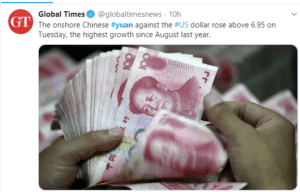 Alongside China, the Bank of Japan said they are conducting technical and legal research in the field of cryptocurrencies. This was announced by the governor of the Bank, Haruhiko Kuroda. He said, however, that Japan has no plans for issuing a digital sovereign currency as crypto demand is not high.

In December 2019, China announced that the country’s four major state banks were part of the CBDC growth.