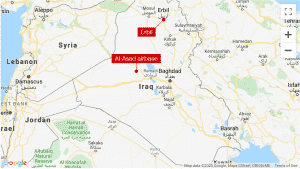 Iran attacks the US troops stationed at two military bases in Iraq this morning with more than a dozen missiles. The complete causalities and the injury reports from the Iraq and the US Officials is still pending.

The Islamic Revolutionary Guards Corps (IRGC), an elite wing of the Iranian military calls the attack a revenge for the death of their military general, Qassim Soleimani, earlier this week.

The price of Gold and oil shot up with long wicks on daily charts; Gold recorded a high of $1611.

Bitcoin [BTC] price broke above $8450 as escalating global tension seems to be having a positive effect it’s demand as well. It is trading 7.8% since yesterday; the price of Bitcoin [BTC] at 2: 30 hours UTC is $8356.

$BTC looking strong after the U.S. base attack news

Could continue to rip up though prior targets to short

If the US further escalates the issue with an aggressive response, the condition will worsen in the affected areas. The adversities will affect the world citizens as large as well, as the tax payers would eventually pay for the war expenses.

Do you think the US will be content after the first attacks or it is just the beginning? Please share your views with us.

The post Breaking: Iran Avenges US Attacks Shooting up the Price of Bitcoin and Gold appeared first on Coingape.