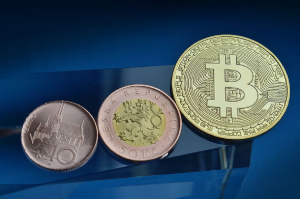 Bitcoin bulls seem to be readying for a comeback after last week’s dip. At spot rates, BTC has an upper hand against the greenback, adding 3% in the past trading day, subsequently pushing their monthly gains to 19%.

Notably, from the daily chart, there is a conspicuous bull candlestick bouncing from the 20-day Moving Average, or the middle Bollinger Band, an important support level, pointing to accumulation and possibly bull trend continuation.

Whether this is bullish or not isn’t important. This is because the market is cautious, and traders willing to exit in case prices turn for the worst.

The most recurring theme among permabears is the possibility of prices tumbling down to $5,500 or worse in days ahead.

#bitcoin A few days ago i posted this step-off pattern that bitcoin likes to follow in a downtrend sometimes, as seen in the right chart from a recent prior bitcoin selloff. The left chart is the current chart. As you can see, so far identical. Lets see if the second drop follows pic.twitter.com/Oa7CnrAoPV

Their argument is that at spot rates, BTC price is overvalued and there is a high probability of price action striking equilibrium through a markdown from spot levels to below $7,000.

Other analysts are of the view that BTC could consolidate in wide ranges in a “max pain scenario” until market participants lack interest. Then bulls will flow back and thrust prices higher.

According to Josh Rager:

“After the breakdown at $9200, many are pointing to $5ks again for BTC. IMO, looks like potential accumulation in this range between $7k and $9k. Max pain is sideways – just enough to disinterest and to keep retail investors from buying heavy in fear of lower prices.”

“Most aren’t willing to sell Bitcoin out of fear if price drops below $6k. But many would likely take the opportunity to buy more Bitcoin. In the previous range, every time Bitcoin dropped in the $6ks, it was bought up within a couple days to push price back over $7k.”

But many would likely take the opportunity to buy more Bitcoin

In the previous range, everytime Bitcoin dropped in the $6ks, it was bought up within a couple days to push price back over $7k

As it is, BTC is in a firm uptrend and market participants are net bullish judging from price action of the last few days.

The failure of bears to comprehensively close below the middle Bollinger Band as trading volumes dropped is hinting of an exhaustion.

Besides, last week’s price action was held within Jan 14 trade range. From an effort versus results perspective, this is a net positive for bulls.